With Kris Carroll’s leadership, success continued into the new millennium. Another landmark triumph among Grady-White product offerings was the 2001 introduction of Grady-White’s 33-foot Express 330. At the time of introduction, the Express 330 was the company’s largest boat and in 2001 was hailed as Boating Magazine’s Boat of the Year, in part because the outboard boat achieved an unprecedented level of room, comfort and proficiency in sportfishing. The boat was unrivaled even among many larger inboards. The Express 330 was widely praised, along with strategic partner Yamaha Marine, for taking modern outboard power to a new level. 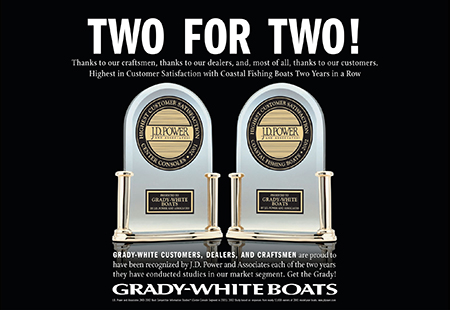 Grady-White goes “Two for Two,” being ranked “Highest in Customer Satisfaction with Coastal Fishing Boats Two Years in A Row.”

Grady-White goes “Two for Two,” being ranked “Highest in Customer Satisfaction with Coastal Fishing Boats Two Years in A Row.”

By model year 2002, with 20 different models ranging from 18-33 feet, including two dual consoles, five center consoles, six walkaround cabin models and two express cabin models, Grady-White was offering customers the most complete line in coastal boating. Grady-White customers were becoming more and more brand loyal, and through carefully listening to the needs of these customers, the company achieved greater and greater success by following its formula of fine-tuning the product line each year based on customer feedback, exceptional attention to detail, and innovative designs.