Highlighting the 2006 model year was the remake of the Bimini 306 (now known as the Canyon 306), Grady-White’s 30' center console originally introduced in 1998. Grady’s design and engineering team approached the 306 task with enormous enthusiasm and began a dialog with 306 owners, dealers, and interested associates. The model update was very popular, with innovative changes in almost every area of the boat. One of the standout features of the new 306 was a completely redesigned “Command Seating” helm area with deluxe helm and companion seats, and a sports-car-like feel at the helm. There was even an automotive-style console glove box. The 306 also featured a sturdy hard T-top, complete with optional easy-to-use 15' telescoping outriggers. Grady incorporated the company’s patented aft bench seat and a super rigging station and livewell arrangement in the aft area of the leaning post.

2006 also saw the revamp of one of Grady-White’s most versatile models, the fishing-and-family-friendly Gulfstream 232. Available with single or twin engines, the 2006 232 gave its owners enormous versatility and value. A wide-bodied walkaround cabin, the 232 is perfectly suited and comfortable for hunting big game offshore among much larger boats. Plus, partly because of the newly redesigned cabin complete with plenty of napping room, a nice stove, plus ample galley storage and optional head, the 232 really makes a nice coastal family boat.

The Tournament 275 was introduced as the “ultimate coastal family boat” designed with amenities of a premium inland cruiser and Grady-White’s inherent saltwater capability. Targeted at the coastal lifestyle, it was an instant hit.

The Tournament 275 was introduced as the “ultimate coastal family boat” designed with amenities of a premium inland cruiser and Grady-White’s inherent saltwater capability. Targeted at the coastal lifestyle, it was an instant hit.

In December 2006 - January 2007, at the New York National Boat Show, Grady-White redefined the family cruiser by introducing the Tournament 275, a remarkably versatile 27-foot multipurpose family boat especially for coastal and big water use, now known as the Freedom 275. The 275 was instantly popular because it is one of the first boats available that combined the amenities of an open inland cruiser with a saltwater-tough Grady-White hull. The Tournament 275 was the 21st model available to customers in the 2007 model year, once again ensuring that Grady-White continued to offer the most complete line in coastal boating. 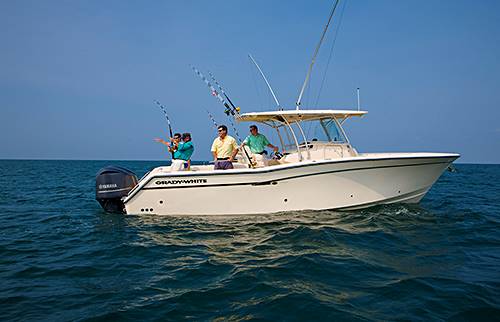 Many people may not immediately think of Grady as a center console boat builder, but as the 2008 model year began in August 2007, Grady-White literally and figuratively lengthened its lead as the manufacturer of the world’s most complete line of center consoles, ranging from 18'-33', by introducing its eighth center console, the fantastic 33' Canyon 336. The Canyon 336 upped the ante for innovation, and continued the high standards and attention to detail that deliver the long-term value and genuine satisfaction that customers embrace. The 336 offers the fisherman a big, beamy easy-to-fish cockpit and rigging station, and one of the best and most comfortable helm area seating arrangements anywhere. What’s more, the lockable console features a roomy stand-up head enclosure, with a nice deep sink and a freshwater shower. An optional microwave oven heats food and beverages. There is even a berth that extends forward, providing additional storage space or a place for a tired fisherman to get a little rest.

As if all these fantastic new models weren’t enough, there were more honors and recognitions. Having already received recognitions of excellence in every study ever conducted in the marine industry, in early 2008 at the Miami International Boat Show, once again Grady-White was highest ranked in the coastal fishing boat category when named “Highest in Customer Satisfaction with Coastal Fishing Boats Seven Times in a Row.” “What a great confirmation of Grady-White’s continuing dominance in customer satisfaction!” said Kris Carroll, Grady-White president, as she accepted this seventh trophy. “We are incredibly pleased and proud to receive this award. We never take this recognition for granted, and will continue to focus on making our customers exceedingly happy. Our entire team–not only our factory associates, but also our dealers and suppliers–has a great passion for and experiences a lot of joy in delivering something special in the lives of our boat owners, something that makes their families feel so fulfilled,” Carroll continued.