Grady-White followed up the enormous success of the 2001 Express 330 with the 2005 introduction of the 37-foot Express 360 (now known as the Express 370), another home run among Grady-White owners, and a hit throughout the industry. The Express 360, with size and amenities made possible by further advances in outboard power, was hailed as another true outboard breakthrough, bringing Grady-White customers the big water performance, comfort and fishing capabilities that historically have been found on inboard engine boats costing hundreds of thousands of dollars more. 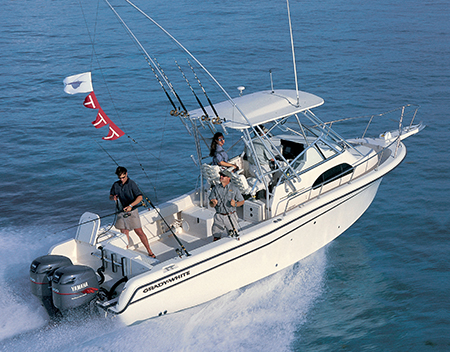 Grady-White wasn’t afraid to redesign and improve even its most longstanding and popular models, such as the 28’ Sailfish 282.

Grady-White wasn’t afraid to redesign and improve even its most longstanding and popular models, such as the 28’ Sailfish 282.

2005 brought much more than the continued and growing success of the Express 360. With customer encouragement, Grady-White had learned not to be afraid to redesign and improve even the company’s most longstanding and popular models. In model year 2005, Grady did exactly that with the very popular 28' Sailfish 282. Taking a cue from the highly successful Express 330 and 360 interiors, the 2005 Sailfish featured a handsome cabin upgrade with entertainment systems (stereo, optional flatscreen TV with DVD player), more storage and creature comforts, and a teak and holly cabin sole. Above decks, the Sailfish helm and cockpit also were redesigned, incorporating customer requests for greater visibility and electronics access, plus greater fishing function and comfort in the cockpit area. These features made the venerable Sailfish even more popular.

Grady-White continued to be recognized as highest ranked in customer satisfaction.

Grady-White continued to be recognized as highest ranked in customer satisfaction.

In the 2005 model year, Grady-White introduced customers to the “Grady Care” concept, an integrated system of satisfaction and exceptional attention to detail that Grady-White has developed and put in place over the years. Grady-White remains the industry’s most focused company on owner satisfaction programs including dealer events such as tournaments, cruises, fishing schools; print and digital newsletters; dealer sales and service training; and other programs. Grady-White Boats and your Grady-White dealer work hard to make the Grady-White ownership experience the absolute best boat owning experience.