Breaking Ground on a New Plant, and Learning That Customer Feedback Is Necessary, Positive or Negative 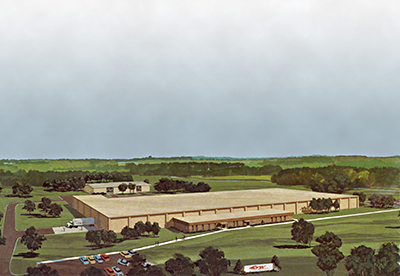 In late 1972, with Wiley Corbett’s guidance and a great team of employees at his side, Eddie and Grady-White broke ground for what was to become and what (through continuous improvement and consistent investment) remains one of the world’s most modern and well integrated fiberglass boat manufacturing facilities. The stage was set for growth.

By listening to customers and paying exceptional attention to all the details, Grady-White began perfecting center console designs. The openness of center consoles allowed easy movement around the boat, with room for the installation of rod holders and racks that people wanted. Grady-White equipped models with all kinds of ingenious features such as nonskid decks and self-bailing cockpits, plus insulated storage and iceboxes that drain directly overboard and more than enough foam flotation–resulting in unsinkable boats. The center console soon became the style of choice among many boat buyers.

Grady-White began to manufacture one of the earliest walkaround cabins, the Hatteras 204-C Overnighter.

Grady-White began to manufacture one of the earliest walkaround cabins, the Hatteras 204-C Overnighter.

Soon the Grady-White team moved the console forward and made a cuddy cabin. This provided space for a real windshield onto which canvas protection could be mounted. Now a boat had the benefit of a walkaround console, plus the protection of a cabin with room for a bunk and even a head. Thus Grady-White began to manufacture one of the earliest walkaround cabins, the Hatteras 204-C Overnighter. It was, as company literature put it, “The comfortable move to a fishing machine.” It wasn’t the first walkaround cabin, but because the details of the Grady model came from customer input, Eddie believed it was the best.

People were curious about the cross between a center console and a cuddy. At the New York Boat Show in 1975, recalls Smith, a middle-aged couple was among the first customers to look the boat over. “The wife called it the ugliest boat she’d ever seen,” remembered Smith. “I was crushed.” Later the couple came back, heard the story about the 360-degree access around the boat, the small but comfortable cuddy, the room for a private head, and the protection of an enclosable helm. At the end of the day they returned to the Grady-White booth. “They understood the concept, and they bought the boat!”