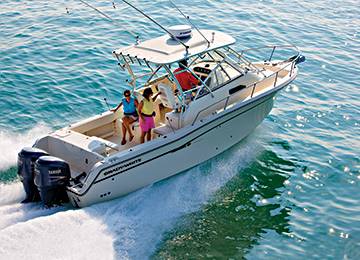 For the 50th Anniversary 2009 model year, Grady-White introduced the Chesapeake 290, a superb 29-foot walkaround with range, capability, comfort, and a name the echoes Grady-White predecessors with a legacy of quality that goes back to the wooden boat era.

For the 50th Anniversary 2009 model year, Grady-White introduced the Chesapeake 290, a superb 29-foot walkaround with range, capability, comfort, and a name the echoes Grady-White predecessors with a legacy of quality that goes back to the wooden boat era.

In the 2009 model year, Grady-White continued to do what the company does best: introduce great new products and features, plus focus on attention to detail and the customer satisfaction this focus brings. Kicking off the 2009 model year and beginning the celebration of the company‚ as the 50th year in business began, in late summer 2008 Grady-White introduced a new walkaround cabin model, the 29-foot Chesapeake 290, a boat named after a very popular Grady-White originally introduced in the early years. “The fact is, we are the company that pioneered the walkaround in 1974 and we’ve put all those years of refinement into all of our walkarounds. Whether your Grady Life is about serious fishing capability that is also family pleasing, or whether you’re looking for a family-friendly boat complete with a roomy head and overnight sleeping comfort that can really do the job right when fishing gets hot, a Grady-White walkaround has it all,” said Vice President of Engineering David Neese. The Chesapeake 290 also introduced some great new deluxe seating options with flip-up bolsters for the helm and companion chairs, and companion bench seating that became quite popular and was incorporated into other models.

The Chesapeake 290 was far from all of the innovation coming from Grady-White in the 2009 model year. With the introduction of the 30-foot Tournament 307 (a boat model later re-named the Freedom 307) in early fall at the beginning of the 2009 model year, Grady-White added to a whole new category in boating: open, big water coastal cruisers. The company now offered the most complete line of safe, seaworthy, multi-purpose dual console style boats. These boats, built with refined durability in the Grady-White tradition of versatile, seaworthy saltwater fishing and family boats, were pioneered by the Grady-White Tarpon 190 created in 1978. Customer requests for a roomy cruising-and-fishing boat with genuine oceangoing capability were the inspiration for the Tournament 307. A great fit for families with homes or second homes at the coast or on lakes, and perfect for those with a wide range of water activity interests, the 10'7"-beam 307 was created to assure a great day on the water for the whole family. Like its Grady-White siblings (the Tournament 205, 225 and 275, all later renamed as Freedom Series dual consoles), the Grady-White 307 features an enclosed head area. The boat offers the seating and comforts of an inland cruiser, with a big-boat hull proven for rough water, big-water safety, and capability. 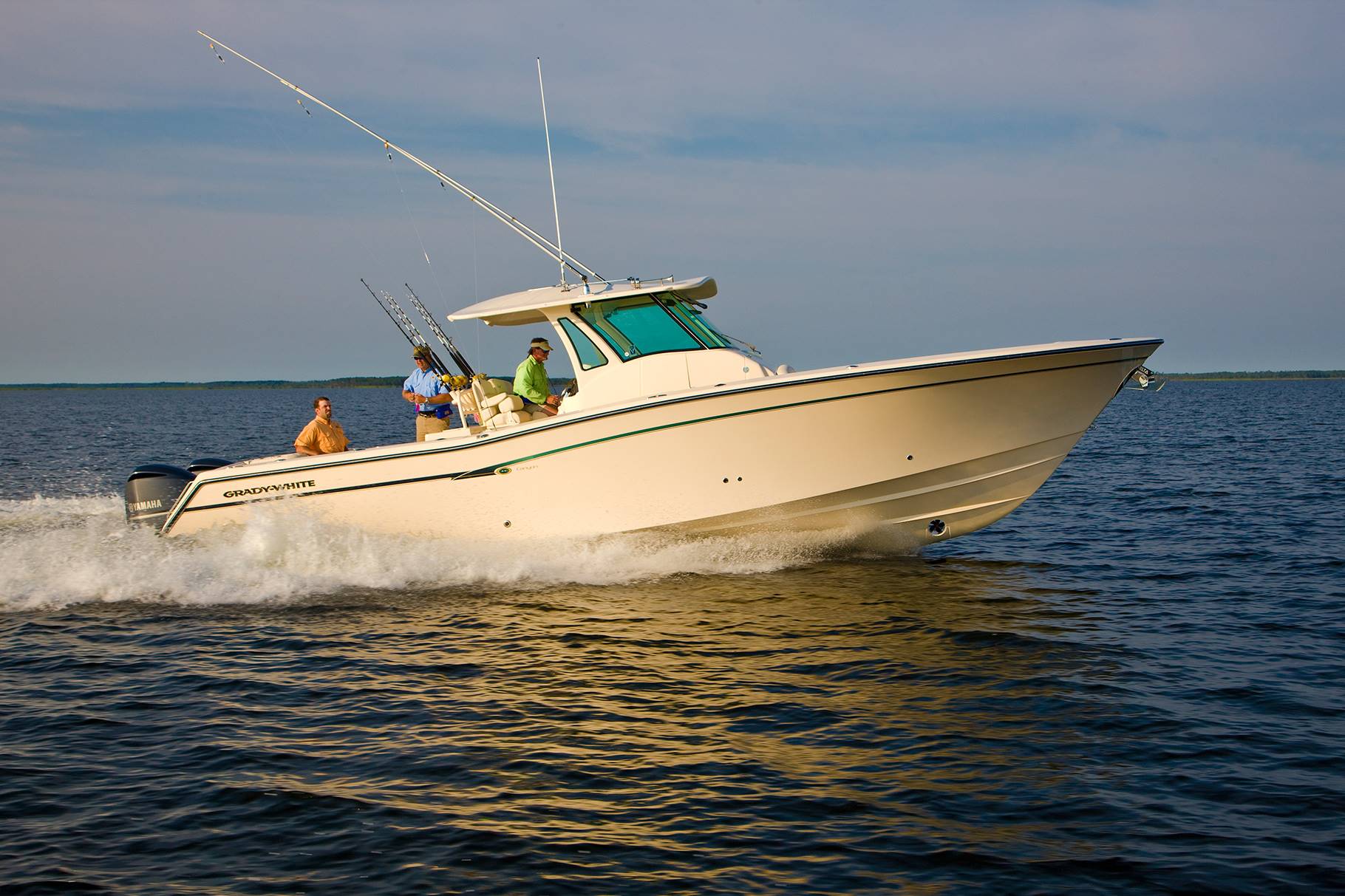 Grady-White's biggest center console to date, the 37' Canyon 366, was introduced in December 2008.

Grady-White's biggest center console to date, the 37' Canyon 366, was introduced in December 2008.

In December 2008, Grady-White completed the prototype for the company’s biggest center console to date, the awesome, super-fishing beast, the 37-foot Canyon 366 (now known as the Canyon 376). Although the 366 was billed as a center console, it might more properly be called a “center cabin” boat. The extraordinarily roomy console cabin not only has more than ample bulk storage, it comes complete with air-conditioned comfort and features a stainless sink plus a roomy shower area, as well as a microwave and optional flat screen TV. Bottom line is that this “center console” with all its creature comforts is a far, far cry from the Spartan center console fishing platforms coming out of Florida in the late 1970s and early 1980s. (Watch the Canyon 376 video.)

As the year 2009 arrived, Grady-White marked its 50th Anniversary with the electronic publication of a book and video about the company’s history. (Read the book and see the video here.) Grady-White’s position as a leading company, with financial strength and a solid business model carefully built and nurtured by the Smith family and the longstanding management team, empowered the company to continue its mission of providing the ultimate boating experience to customers–despite difficult economic conditions. The talented engineering team didn’t miss a beat in designing great new products. In Miami at the February 2009 boat show, Grady-White was awarded the eighth consecutive J.D. Power and Associates award for the highest-ranking coastal fishing boat in customer satisfaction. Later in the year, the company was likewise awarded its eighth consecutive NMMA CSI award for excellence in customer satisfaction, continuing a string of gaining every third-party recognition for customer satisfaction. And in March, Grady-White owners gathered 250 strong at the very first Grady Fest held in Punta Gorda, Florida, joined by many members of the Grady-White management team.

That fall, Grady-White began publication of the company’s multiple award-winning e-newsletter, Docklines (subscribe here). And early in October, Grady-White saluted retiring Northeast territory factory sales rep Bing Fishman, a man who pre-dated even Eddie Smith at Grady-White and who was an icon in the industry–a genuine “character” as well as a strong supporter at Grady-White dealership events. The dealer meeting in October 2009 was held at the Grady-White plant, with a costume party themed “The 1950s,” complete with a wall of vintage photos and items from the past. Talk about the company’s and many of the dealerships’ perseverance through the years dominated the presentations and the conversation. Dealers also got to see a great new style of hardtop enclosure for the Express 360.