The opening of a new 50,000 square-foot plant expansion began a new era of Grady-White manufacturing. This new $6 million fabrication area reaffirmed the Grady-White plant as the world’s most modern and completely integrated boat building facility of its kind, providing customers the benefits of efficiency and productivity with resulting superior quality and value, and providing Grady-White associates with the best possible working environment. During model years 2003 and 2004, product advances made to fit a wide range of customers’ needs continued at an astonishing rate, aided in large part by the efficiencies made possible by the new plant expansion. During model year 2003, Grady not only introduced an innovative update to the company’s 25-foot walkaround but also introduced the Advance 257 (now known as the Fisherman 257), a real fisherman’s center console loaded with features. The 257 quickly became the quality and reliability leader in the very competitive mid-size center console market. In mid model year 2002, and continuing into model year 2003, Grady-White introduced the 22' Tournament 225, a phenomenally versatile boat for coastal use and one of the first open dual consoles ever built to feature a roomy head aboard a 22 footer. Aboard the 225, the entire family stays comfortable on all-day outings, and the design was an immediate and longstanding success. 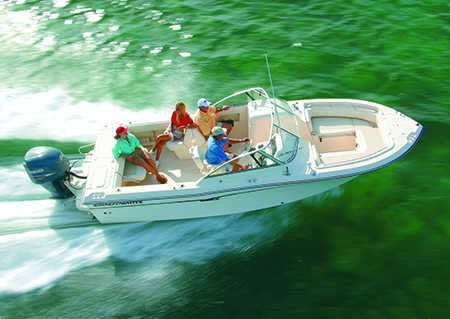 The 22’ Tournament 225, a versatile boat for coastal use, was one of the first open dual consoles ever built to feature a roomy head.

The 22’ Tournament 225, a versatile boat for coastal use, was one of the first open dual consoles ever built to feature a roomy head.

The success of the basic concepts in the 225 inspired Grady-White to continue to innovate in similarly-sized dual consoles, culminating in today’s Freedom 235, as well as the Freedom 275 and 285. In that model year (2003), Grady-White also began balancing all new models for the special demands of emerging four-stroke outboard power. The company continued to introduce items from customer wish lists, such as deluxe seating and Grady’s patented aft foldaway bench seat. In model year 2004, Grady-White placed special focus on the smaller boats in the line by introducing the 18' Tournament 185 and the 20' Tournament 205, a 20-footer complete with head. These smaller Grady-Whites helped the company continue to offer the very best, most satisfying products for inshore use. At the same time, Grady fine-tuned the larger boats, redesigning the company’s breakthrough Marlin 300 with a new cabin emphasizing comfort and adding great new convenience features in the helm and cockpit area. Through customer input and constant feedback, the most complete line in coastal boating was becoming stronger in every size and configuration category in the coastal recreational market. 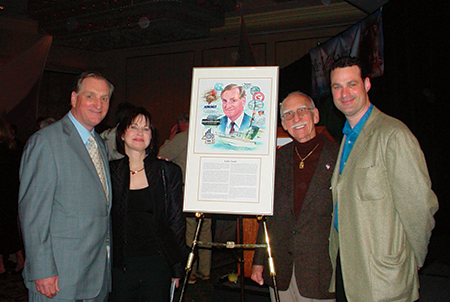 At the Miami International Boat Show in February 2003, Eddie Smith was named to the National Marine Manufacturers Association (NMMA) Hall of Fame, largely because of his contributions to the initial formation of NMMA as well as his interest in boatbuilding and fisheries conservation. At the induction ceremony, Eddie said, “We need to do everything we can to keep boating in a leadership position in recreation in America. We have an awesome product to sell: We provide leisure, fun, and maybe best of all, a wonderful family activity–something our country desperately needs more of! We also have a huge obligation to future generations, to do all that we can to ensure them a great environment, clean waterways, and healthy and abundant fishery resources.” And last but certainly not least, Grady-White was ranked “Highest in Customer Satisfaction With Coastal Fishing Boats Three Years in a Row” by J.D. Power and Associates.