Adding Dual Consoles, Center Consoles to Create the Right Boats for Every Family, and Satisfaction Grows at Another Grady Fest

Grady-White re-introduced the Tournament 192 due to demand and requests for a versatile, high-value coastal 19-foot boat.

Grady-White re-introduced the Tournament 192 due to demand and requests for a versatile, high-value coastal 19-foot boat.

In contrast to many builders in the industry, Grady-White was active in the 2010 model year, introducing two completely new models (the Freedom 255 and Fisherman 230), reintroducing another (Freedom 192) and completely revamping an old favorite, the Fisherman 209 (formerly named the Escape 209). During the 2010 model year, Grady-White made the decision to change the name of many of the models in order to help customers understand the fundamental functions of the boats. Thus all the dual consoles were re-named as the “Freedom Series” to highlight their versatility; all the center consoles 25 feet and less in size became the “Fisherman Series” to indicate their primary use; and all the center consoles over 25 feet became the “Canyon Series” as they are often used to run well offshore.

Back in 1993, Grady-White took advantage of its long legacy of building great 19-footers by introducing the dual console Tournament 192, one of the company’s most popular models through the 1990s. Due to demand and requests for a versatile, high-value coastal 19-foot boat, Grady-White re-introduced the 192 as the Freedom 192 for the 2010 model year: a classic Grady updated with the many improvements that the company has incorporated into the line every model year.

Mid-year in the 2010 model year, Grady-White also introduced the company’s tenth center console offering, the Fisherman 230. The 8'6"-beam, 23-foot beauty was packed with well-conceived new features making great use of available space, resulting in an aft cockpit roomier than those of many 25-foot boats. Innovations included a clever removable cooler that doubled as forward seating, a stand-up head area in the console, and a handsome, well-engineered optional T-top integrated into the console structure. 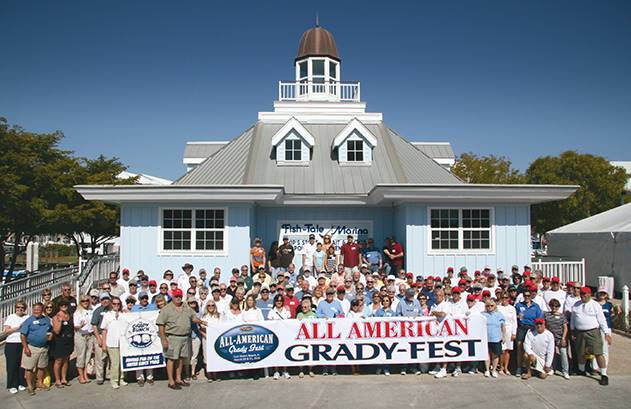 In March 2010, the Grady faithful from all over gathered again, this time in Fort Myers Beach, Florida, for two days of beautiful weather at the second Grady Fest. Parties kicked things off, followed by seminars on everything from technical detail of Grady design to cooking aboard, to the idea exchanges and socializing of Owners’ Clubs, made for a wonderful event. (Watch videos and slideshows of past Grady Fests.)

Spring came, and for the upcoming 2011 model year Grady-White introduced yet another dual console model, this one with a stand-up head: “The Ultimate in Versatility” Freedom 255. For coastal and big-water boating, Grady-White’s increasingly popular dual consoles began redefining family recreation for a new generation by capitalizing on the Grady-White heritage of building the safest, best-riding, highest quality boats in their categories, and by enhancing design and features–like the stand-up heads–that provided enormous versatility and recreational freedom. (Learn more about the Freedom 255.)

Also as a prelude to the 2011 model year, in midsummer Grady-White responded to customer requests by completely revamping the Fisherman 209, a popular 8'1"-beam 20-foot center console that included a much roomier head area, deck-level access all the way to the bow of the boat, a redesigned helm and electronics area, plus an optional T-top that was handsomely integrated into the console.