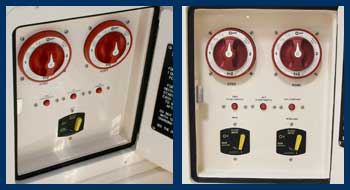 Battery select switches are found on boats with two or more batteries. They designate which battery or battery bank is being used for starting the engine(s), powering the accessories on board, and receiving a charge from the outboard engine(s). There are four positions on the switch: 1, 2, BOTH (sometimes labeled 1+2) and OFF. Position 1 draws from Battery 1 or Bank 1; Position 2 draws from Battery 2 or Bank 2. The BOTH position is utilized when you cannot crank the engine in Positions 1 or 2 alone due to weak batteries, and combines the power from both batteries or banks.

After starting an engine the switch should be returned to the 1 or 2 position. We do not recommend operating for extended periods in the BOTH position. In normal use with twin engines, select Position 1 on one switch and Position 2 on the other so both batteries or banks are being used and charged. On single engine applications, alternate between Position 1 and 2 routinely.