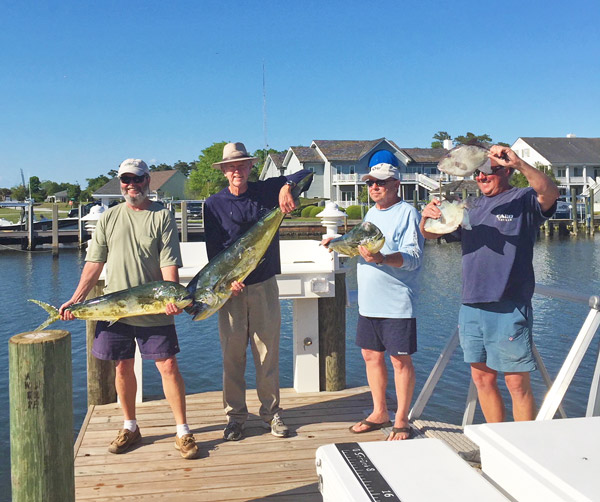 In the mid to late ‘80s, Jerry Ballard was a fishing fanatic. His love of the sport and his boat even got him featured in a Grady-White magazine ad after he and fellow fisherman, Mack Baker, won the Hardee’s/Atlantic Beach King Mackerel Tournament in 1987.

Back then, Jerry owned a Fisherman 249, a center console that he bought primarily for fishing. “In those days I spent 80% of my boating time fishing,” noted Jerry. But 30 years later his priorities have changed, and he and his wife, Cathy, spend 80% of their time on the boat cruising with their English golden retriever, Alli. “I still love to fish, but now that I’m a little older we spend more time cruising,” noted Jerry who said he planned his knee replacement around the boating season.

Somewhere along the way he sold the Fisherman 249, much to Cathy’s dismay. Fortunately, he never forgot the quality craftsmanship of a Grady-White, so last year when a friend, David Chappell (a two-Grady owner himself), told him he should go to the factory and see the all-new Freedom 325, he and his wife made the trip to Greenville, NC. When Jerry recalls the tour he says, “Right then and there, it was a done deal!” But Cathy tells a slightly different story. When their friend told them about the boat and suggested they go for a plant tour, Cathy was excited. She loved their first Grady and was elated at the thought of buying another one. But Jerry had always said he’d never owned a dual console and wasn’t interested in buying one now. Cathy said she told him, “Well I’m going to go see that boat.” So, Jerry agreed to go, and the rest is history.

What sold Jerry on this boat? He was quick to point out, “This boat has lots of storage, head room, added coolers and a lounging area with a table as well as the latest in electronics including dual Garmin multifunctional 16” displays, a 48-mile open array radar and autopilot. We especially like how the chaise lounges extend out.” He went on to note that this boat has a lot more usable room than other 30+ foot boats he’s owned. Another feature they both love is the SureShade® electrically retractable shade with Sunbrella® canvas that adds additional shade to the cockpit area for more comfort. Cathy loves that they can take this boat out and do what each of them loves. “The 325 allows us to go off-shore where Jerry can fish off the back of the boat while Alli relaxes and I lounge comfortably up front with a good book,” she said. The first time Jerry went deep sea fishing with friends he came home and said, “Cathy, the comfort of that boat is like no other boat I’ve ever experienced,” he went on to declare, “There’s just no comparison.” And what does Cathy have to say about the dual console Jerry swore he’d never own, “I think he loves it more than I do!”

After all the enjoyment they’ve gotten from the 325, it’s no surprise that this spring when Jerry decided he wanted a boat he could trailer to Key West in the winter he would look no further than Grady’s 251 Coastal Explorer.  “This is a great boat for a quick run to the inlet for Spanish fishing,” says Jerry as he spoke about the new boat. “The 251 is fully rigged for fishing with a Garmin multifunctional 12” display, autopilot, remote control spotlights, a trolling motor, a 10-foot power pole and antennas that are controlled like outriggers with a crank so I don’t have to stand on the gunnel to lower. I’m going to get more use out of these two boats, the 251 Coastal Explorer and the Freedom 325, than any others I’ve ever owned,” noted Jerry. “My other boats were just not as ‘well-rounded’ as the Grady-White. These boats are exceptional for cruising and fishing.” He also likes the fact that it’s easy to go out on the 251 for short rides and when he gets back to the dock it’s easy to clean up.

Cathy said when he went to the plant to look at the 251 she didn’t need to tag along. She had already been on one with the local dealer and knew she wanted one! “It’s a good little boat for short cruises or for Jerry to take to the inlet to fish,” says Cathy who went on to say, “Grady-Whites are just great boats, they’re all about comfort and protection–it’s a real delight owning them!”

Jerry and Cathy have already enjoyed one excursion with the new 251. They took some friends out to cruise around during the Big Rock Blue Marlin Tournament, and Cathy noted that there was a lot of big traffic from the large sportfishing boats, but the 251 handled beautifully, and the ride was great! And their friends, “well, they were amazed at all the cup holders! Just one more example of the creature comforts built into every Grady-White boat.” What’s up next for the Ballard’s and their new purchase? “We’re going to go out when the tides are low and let our dog, Alli, be a pig!” says Jerry. “When the tides are low and the shoals are exposed she loves to get out of the boat and roll around in the mud. The 251 is the perfect boat for her to get in and out.” Could Alli love the boat more than Jerry and Cathy? Sounds like that’s a strong possibility! 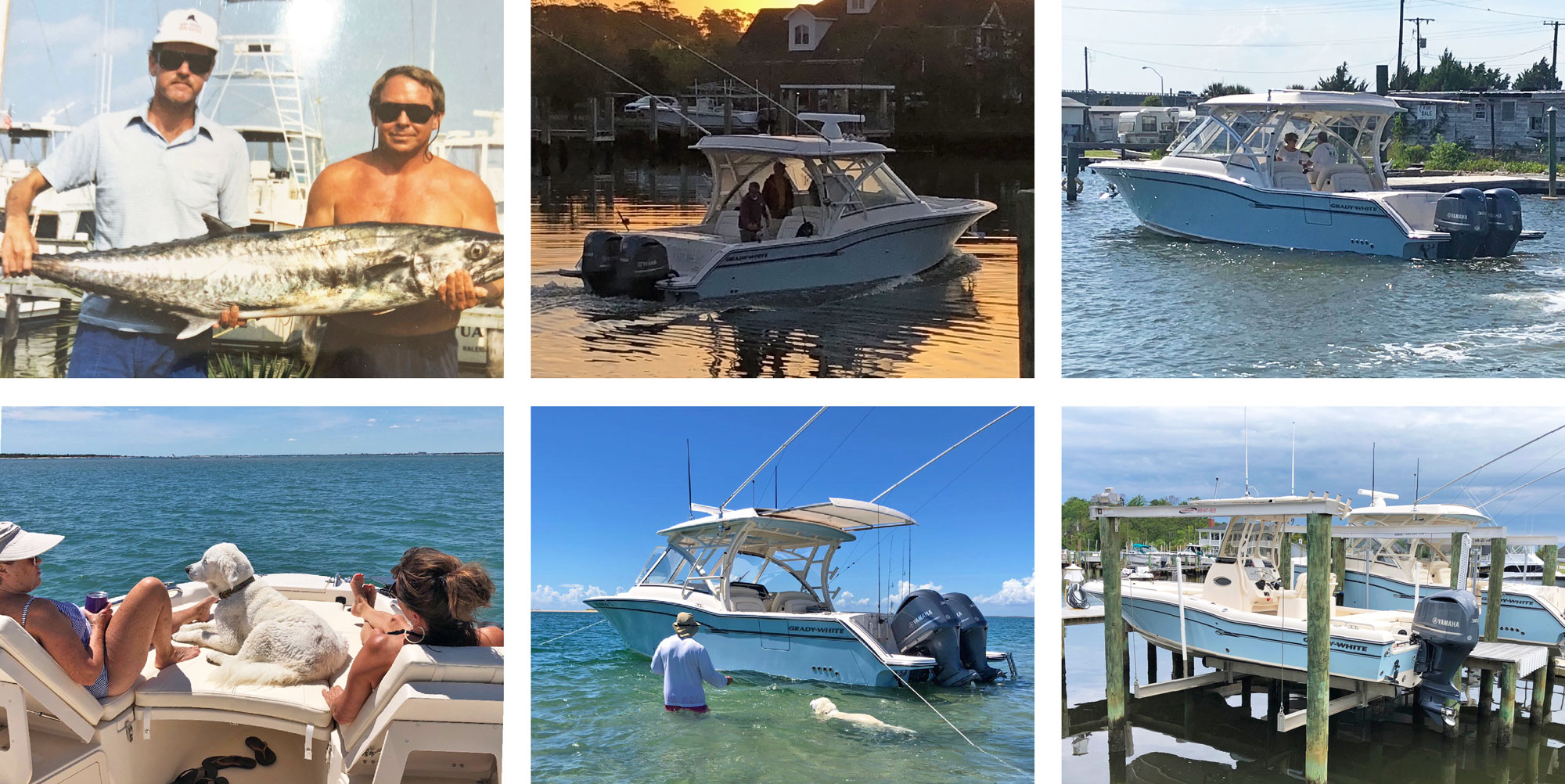 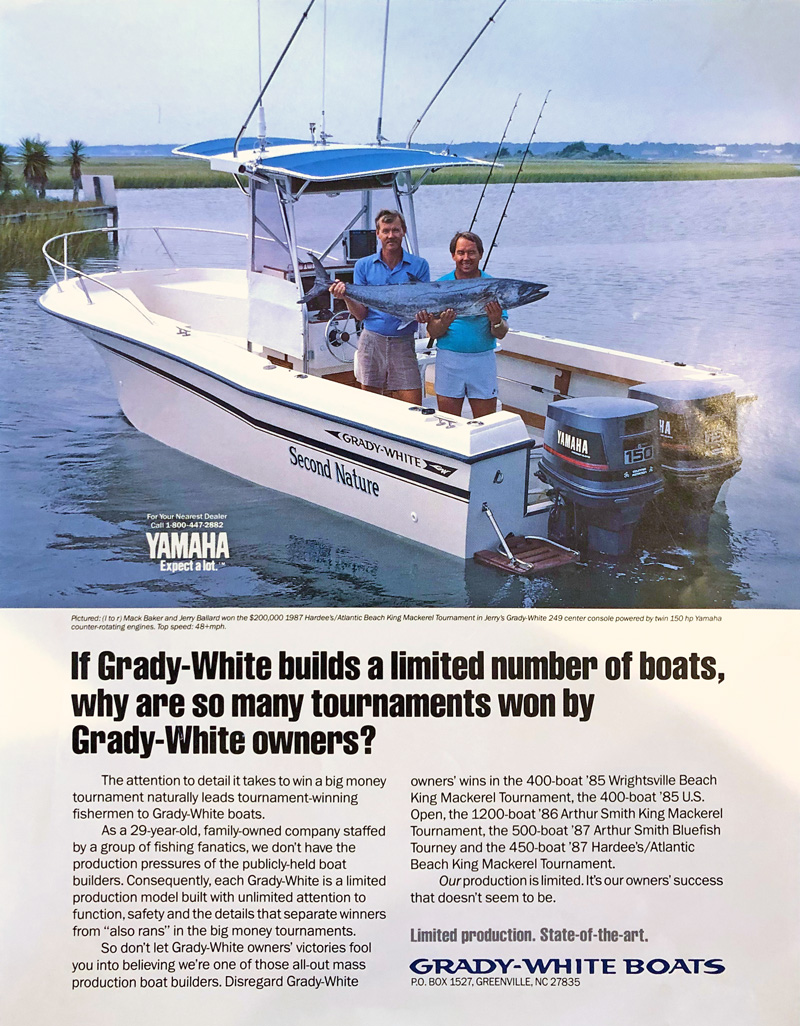