A trip to the Abaco Islands, boating capital of the Bahamas, is a dream vacation. Their turquoise blue waters, protected from the wind and waves by hundreds of islands and a huge reef system, make them the best cruising grounds in the Northern Hemisphere. But Joe Borrison’s dream was to arrive at this boater’s paradise aboard his own boat with his own fishing rods, tackle and diving equipment.

Joe, a resident of Maryland, noted that if you look on Google Maps, you can see how close the Abacos are to Florida. With this in mind, he began to devise a plan. He’d trailer his boat from his home in Maryland to West Palm Beach, then cruise the 56 nautical miles to West End where he would clear customs and refuel before taking the second 125 nautical mile trip to Abaco. While Joe was up for the adventure, his wife and friends were not. In fact, some called it “foolish.” 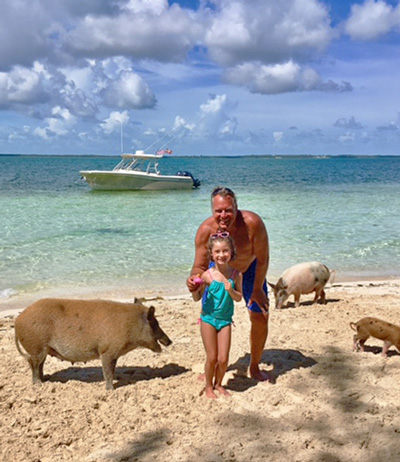 The boat Joe would use for this adventure was a 21-foot Nassau Grady-White he had spent five years refurbishing. “I’d replaced everything from the stringers to the engine on that boat. I knew it was solid, and I knew every inch of it,” said Joe, who took his first trip in June of 2014. While he didn’t think the trip was foolish, he did take great precautions, packing spare parts from propellers and filters to a backup GPS. When he left the dock in West Palm Beach, he had an EPIRB in his left pocket, a handheld VHF in his right pocket and an inflatable lifejacket. He also had a backup radio and a float plan.

He gave himself a weather window of three days and decided if the wind was greater than 15 knots, he would leave the boat on the trailer and fly to meet his family, who were already in the Abacos awaiting his arrival. Joe was greeted in Florida with perfect weather and only 5 knots of wind. He left the dock at 8:00 in the morning and arrived at his destination nine hours later, a little sweaty and salt-encrusted but just in time for happy hour.

The second year, Joe had another uneventful trip by himself. But the third year, when his son-in-law decided to come along for the ride, it was an altogether different experience. This time, Joe encountered rough seas that rose to 6 feet at times, making the trip challenging for them both. After that excursion, Joe came to the conclusion that, “While I loved my boat and all the attention it drew, I realized it was time for a larger boat!” With retirement approaching, he knew they were not going to stop visiting Abaco, so he and his wife began to search for a larger boat that would be both safe and comfortable.

For the next year, they searched on the internet, went to boat yards and had lots of discussions that took them from their current 21-foot Grady-White to boats as large as a 46-foot trawler. While a trawler would have worked well for the two of them, there were many reasons it was not as practical. First, the trip from Maryland to the Bahamas could take as long as a month, and at only 6 knots it would take more than a day for the crossing itself. Joe also wasn’t interested in the maintenance requirements of a large inboard boat.

After a year of searching, Joe thought back to his buddy’s Grady-White Express 330, a boat he had fished on since 2007. After years of hard use and hundreds of trips to the canyons, along the Mid-Atlantic coast, and in various sea conditions, there were no cracks and no major or even minor repairs needed. Joe was sold not only on the Grady ride, but even more so on the quality of the build, which he had not experienced with other boats he had owned. With that, he and his wife decided to purchase a Grady-White Freedom 285 dual console. The layout of the 285 was the best in the industry for their family. With a hardtop for protection from the tropical sun, helm and copilot seats on the same plane to make talking easy while underway, and an open bow, he knew this boat would make him happy trolling the canyons or taking the family on a cruise in the Chesapeake or the Bahamas. “The boat fit all our needs and had a hull that I knew would function well in two-footers or even eight-footers and get me back home at the end of the day,” said Joe.

While he did have to upgrade his towing rig from a Jeep Wrangler to a larger ¾ ton truck and buy towing permits because of the 9’6” beam, he says it was well worth the effort for the vacation experience, and they find each year to be better than the year before. Joe says, “The Grady was an excellent choice for our family and provides a safe and comfortable ride, allowing us endless days of cruising and fishing fun with minimal effort.” Joe’s son-in-law, who braved 6-foot seas in the family’s previous 21-foot Grady, is looking forward to climbing aboard for the trip again this year, but this time without fearing for his life.

Joe offers some advice to people who are considering a trip like this: take a course if you’re worried about your navigation skills, take a friend or two to share in the responsibility and leverage one another’s capabilities. He wants people to know that it doesn’t take the better part of a year and a million-dollar yacht to make this dream a reality–if you think that, he says, “You’re missing the boat!”