First Families of Boatbuilding—Living the Vision 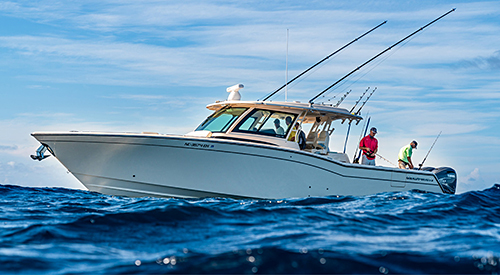 As much as any other success story, Grady-White’s may be the result of one individual’s vision and ideals. Glenn Grady and Don White founded the company in 1959 in Greenville, N.C., and sold it to Eddie Smith nine years later. As owner and CEO, Smith followed a simple principle that has guided the company ever since: He didn’t want to be the biggest; he wanted to be the best.

By the early ’70s, Smith had discontinued the last of Grady-White’s lapstrake mahogany models and gone all fiberglass. He moved Grady-White from the old tobacco warehouse where it was born to a 150,000-square-foot production facility across town he had designed and built to be a state-of-the-art boatbuilding factory. Along the way, he created walkarounds, dual consoles and center consoles that could perform offshore and serve as versatile family boats. 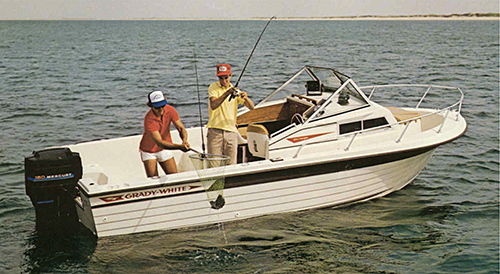 In the late ’80s, Grady-White teamed with naval architect C. Raymond Hunt to develop the SeaV2 hull, a design hailed for its smooth, dry ride and deft handling. The hull became Grady-White’s performance signature, helping propel the company to employ 350 people and expand its facility to 500,000 square feet. The lineup has grown to include the first-of-its-kind 37-foot dual console and a 45-foot center console.

A corollary of Smith’s “best not biggest” theorem was that Grady-White achieved all of its growth without any debt spending, a strategy that allowed for sustainable expansion and enough flexibility to endure economic downturns. “Being privately held means we have been able to invest in the long term even in the down times and has always given us an advantage, rather than reacting to market fluctuations and stockholder demands,”  says Shelley Tubaugh, vice president of marketing, who has worked at Grady-White since 1988. She adds that Smith’s ideals also include honesty, integrity and customer focus, and they have played a role in driving the company’s success.

Another factor has been a progressive approach to employee development. Led by president Kris Carroll, who started at Grady-White in the ’70s and took the top job in ’93, Grady-White supports a lifelong learning series that focuses on developing the whole person. 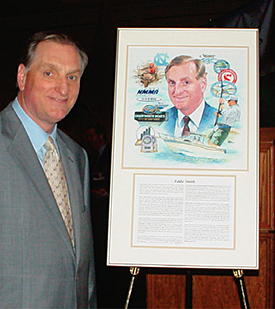 There’s a reading program in which employees are required to read a selection of personal development books and then receive paid bonuses for reading others and writing reviews. At weekly meetings, employees discuss and develop their “eight domains of life.”

That is where Smith’s and Carroll’s personal ideals meet Grady-White’s official vision: “Together, delivering the ultimate boating experience, while enjoying coming to work.”
— J. George Gorant
June 2019 Soundings Trade Only Vol. LVI. No. 12