The Gulfstream Grady Group's Voyage Through the Bahamas

Throughout the years we’ve included many articles about Grady owners and Grady Clubs traveling by boat to the Bahamas. Many of you may have wondered, should I consider taking this trip so soon after hurricane Dorian and in the midst of COVID-19? Here is a recount of a recent trip several Gulfstream Grady Group boats embarked upon. For those of you that have never traveled there before, we hope it sparks an ambition to plan a similar trip. If you are familiar with the area we hope the information about what’s open and opening soon will be of interest to you.

On June 30th, 2020, three Gradys from the Gulfstream Grady Group left Palm Beach for a three-week 700 nautical mile (nm) voyage through the Bahamas. The group included myself and my wife Arlene on our Express 360, Randy and Linda Brown on their Canyon 336, and Richard Wennet is on his Express 330. We are all seasoned boaters that have made numerous Bahamas crossings. With varied interests from fishing and beach combing, to shopping and enjoying the quaint towns, we planned to visit some locations we had not visited in the past.

The first day was a 152nm run across the Gulf Stream to the Green Turtle Club and Marina on Green Turtle Cay. We cleared Bahamas customs and immigration and the voyage was officially “on”! Given the just-opened status of the Bahamas due to COVID-19, the locals gladly greeted us.

Green Turtle Cay was hit hard by Dorian, but the Green Turtle Club was open, and the Bluff House was being reconstructed with plans to open in March of 2021. It was both sad to see the destruction, even after almost a year, as well as heartening to see the people’s resilience, hard work and ongoing recovery efforts. The water and beaches are still beautiful, and a fishing excursion resulted in a number of blackfin tuna, which provided for some sashimi appetizers and fresh fish meals.

The next stop was Boat Harbor at Marsh Harbor on Great Abaco, which was at the core of Dorian’s destruction. The marina office and docks were destroyed by Dorian, however one long marina dock was completely rebuilt and the other five are in stages of rebuilding. At the time, this usually busy marina was hosting only ten boats, including our three. The effects of Dorian and COVID-19 restrictions were obvious. Fortunately for us, an outdoor restaurant, pool and pool bar were fully operational. The Hope Town Inn & Marina is expected to reopen in the fall of 2020. Our favorite shops and cafes were also in stages of recovery.

Next was Schooner Bay which proved fun and interesting to navigate through a new reef and into a new harbor. The few docks were very nice and had fuel available.

On the ninth day, we moved on to Spanish Wells Yacht Haven, which is across the open Atlantic and therefore caused some concerns regarding sea conditions. We did encounter some local storms, however we communicated via VHF, used radar to navigate through them. Once there, we retained a local guide and caught yellowfin tuna, blackfin tuna and spanish mackerel, which provided enough fresh fish for many meals. The chef at the Spanish Wells Yacht Haven restaurant, Wreckers, prepared a multi-course feast from just half a yellowfin tuna! This marina is not as well-known as Harbor Island at the north end of Eleuthera, but is a top tier marina and was good for re-provisioning, enjoying the beaches and fishing, as well as boat repairs, if needed.

Winds started to kick-up a little the rest of the trip. The next stop was 62nm to Cape Eleuthera at the southwest end. We were navigating through new waters to us, including through the exceedingly interesting “Current Cut”. Again, we communicated via VHF and used radar to slip between local storms. We will all remember Chris, the manager at Cape Eleuthera, for his warm and enthusiastic reception when our three boats arrived.

The crossing from Cape Eleuthera to Staniel Cay in the Exumas was almost due south, 41nm if direct, and should have been within 90 minutes on a good day. However, the wind was fierce. Soon after leaving the harbor we encountered large, steep waves to the point of occasionally taking “green water” over the bow. Again, consulting each other via VHF, we decided to parallel the waves and head due west to get to the Exumas, running along the islands south to Staniel Cay, hoping for more protected waters. We had to go slow in the heavy seas until we navigated through the reef just south of Highborne Cay. Even on the west side shallows of the Exumas the waves were wind-whipped, smaller, but still steep and annoying for the remaining 40+nm through more storms). The Exumas are spectacular, higher rock islands with beautiful sandy spots, gorgeous colored water in the shallows as the bottom changes from sand to corals to grasses. An extended stay here included beach time, offshore fishing, bonefishing, snorkeling the “Thunderball Grotto”, and visiting other islands in the area.

Given the same stormy weather for our 96nm trek to Kamalame Cay on Andros Island, we first ran north in the shallows near the Exumas, then turned west, going south of New Providence to reduce the 6,000’+ deep water portion of the Tongue of the Ocean to less than 30nm. The entrance to Kamalame Cay was another new navigation experience through a reef opening, along shore and up Staniard Creek to the docks. The staff at this resort had wonderful service with a group meeting us at the docks to help tie-up the boats. This is a luxurious resort with beautiful tropical landscaping and well decorated open-air buildings. It was a wonderful spot to spend an afternoon after another rough ocean day.

The next leg from Kamalame Cay to Bimini is a 115nm run, and since there is no fuel at Kamalame Cay, a fuel stop was needed on the way. We could have chosen Chub Cay, but we instead chose Morgan’s Bluff at the north end of Andros Island, as this stop was directly on our route. On such a trip, you forget the day of the week. It was a Saturday, and due to the lack of private boat traffic in 2020, the fuel stop had not planned to open that day. However, the friendly folks at the harbor called the fuel station owner, and he drove an hour to open for three “yachts” (yes, they call our Gradys “yachts”) that wanted 500 gallons of gas.

We know Bimini well, and there are multiple marina options. For this stop, we chose the recently purchased and under renovation, Bimini Cove. We love the infinity pool, looking out over the ocean towards Florida as the sunsets. We were able to snorkel on the Sapona wreck, spend time anchored off a beautiful beach, and visit the Bimini Big Game Club’s bar that overlooks the marina. However, the wind and storms we had been encountering were forecasted to make the Gulfstream crossing rough for a week after the next day. This caused us to cross back together to Florida a few days early.

All in all, the trip was great! Because of the easy-going and knowledgeable boaters in our group, any challenges were overcome. Regardless of the wind and storms, the Bahamas are beautiful, including the water and the people. When traveling through the marinas, you meet others with a like mind for private boat travel, and even encounter the same boats in different locations. Good stories told and heard, new experiences, and new knowledge learned. We had a blast and highly recommend such trips to other Grady owners.

At Bimini the group anchored off a beautiful beach.

At Bimini the group anchored off a beautiful beach. 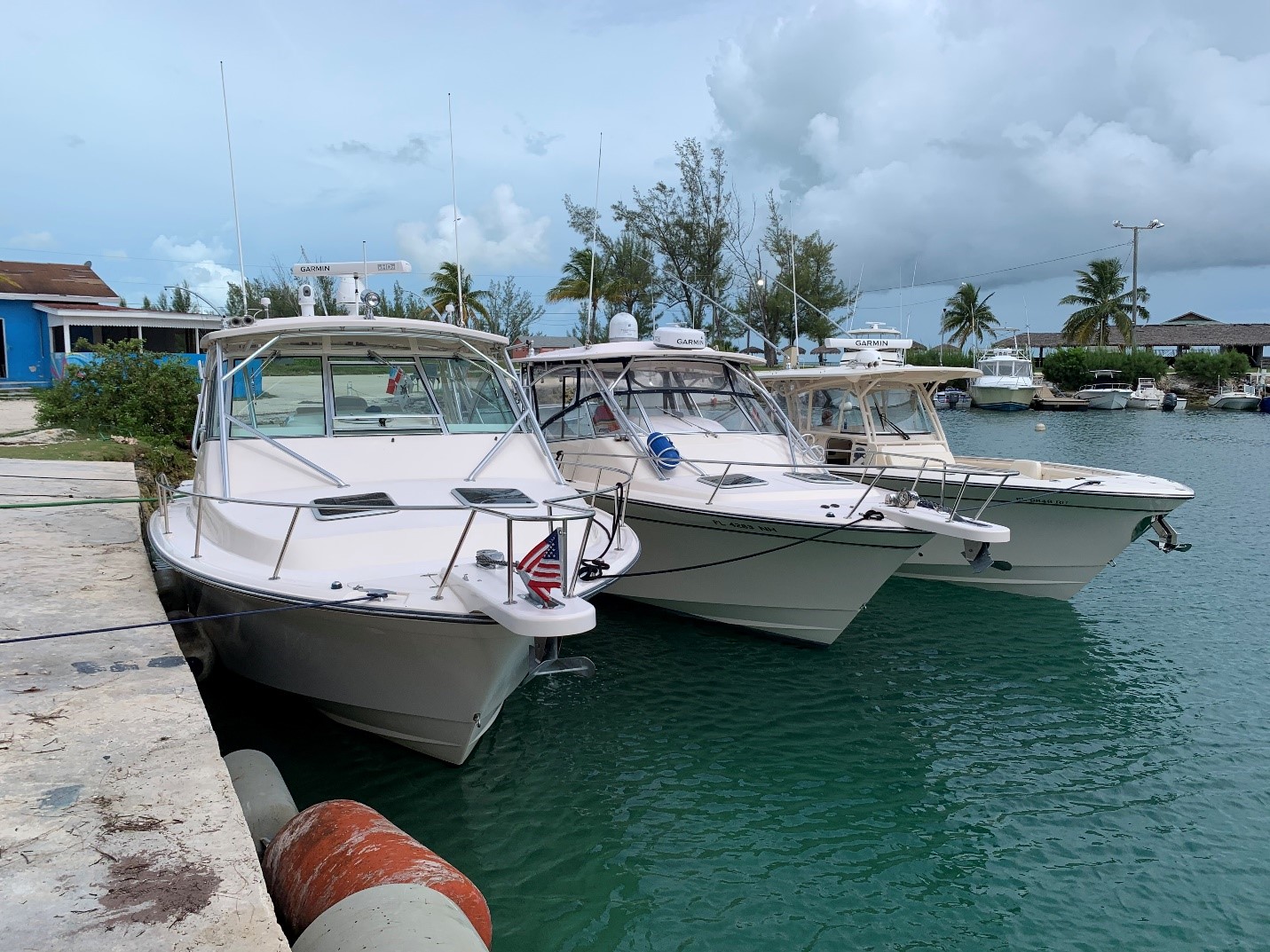 The group gathers for a photo along the way. 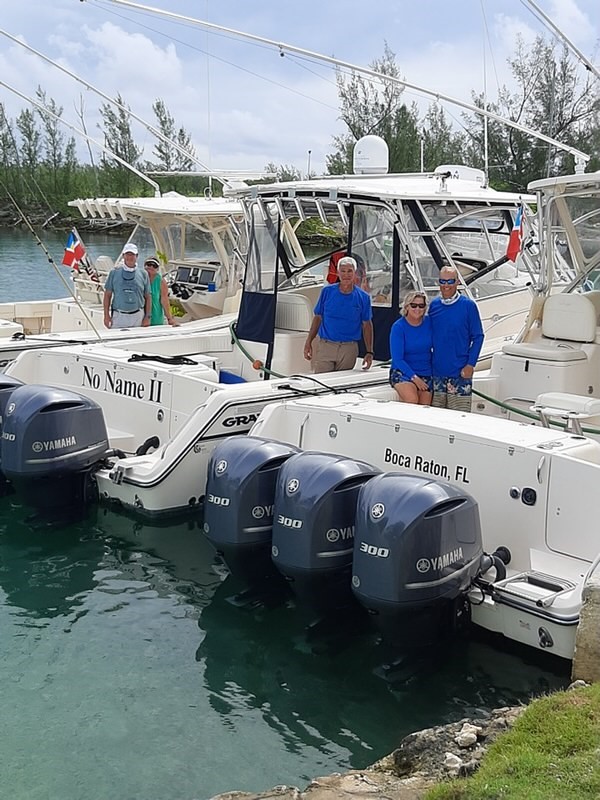 Boats getting fuel at Morgan's Bluff.

The group gathers for a photo along the way.

Boats getting fuel at Morgan's Bluff.

A map of the route taken on the three-week trip.