Tim Smith, seven-time Grady-White owner, admits, “A couple of times I thought THIS boat will last me a lifetime,” but then he notes, “life changes, and then your boat changes too.”

In 1991, after growing up on the water with family and friends in Miami, Tim Smith moved to Vero Beach. It was then he decided he wanted to own a boat. A lot of his friends owned Gradys, and Tim knew about the company’s solid reputation. He did his research and found that many other boat manufacturers had started to cut corners in the manufacturing process–many didn’t have the quality product they’d been known for in the past. He marveled at the consistent attention to detail Grady-White put into every boat, from the smallest to the largest model. That lead him to buy his first Grady-White, an Escape 209 20-foot center console. It was a great first boat and was with him as he married and started a family.

In 1998, now with a wife and three children, Tim decided they needed a bigger boat, so he went right back to Vero Marine Center and bought the Marlin 300. “Boy, this boat can do everything–I’ll never need another boat,” thought Tim after his second Grady-White purchase.

In the meantime, he started doing a lot of sportfishing, and the allure of a larger sportfishing boat momentarily called him away from his Grady Life. “It’s the only time I’ve ever been without a Grady-White boat, but at the time they didn’t have anything larger than the Marlin 300”. Then, as luck would have it, Grady introduced the Express 360. “I think I was one of the first people to buy that model,” noted Tim when recalling his excitement over the brand going up in size. Called “The Versatility,” Tim liked the 360 because there wasn’t anything it couldn’t do–from cruising along the Intracoastal Waterway to tooling around in shallow waters, to water skiing with the kids and docking up at their favorite restaurant, this boat would take them there. And again he thought, “I’ll never need another boat.” 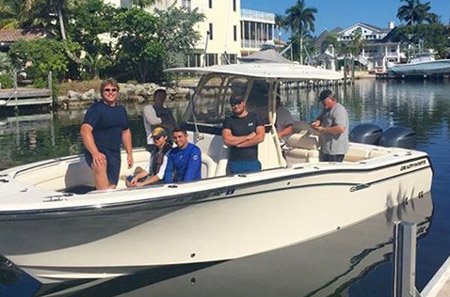 But in 2008, life changed again when the family purchased a vacation home in Islamorada. Tim decided that having a boat he could trailer between home and the Keys would be a good option, so he sold the 36-foot Grady for a Chase 273. He figured this would work since they’d stay in the house and not on-board the boat. And, it would work well in both Vero Beach and the Keys.

For eight years his family had a lot of fun on the 273 they trailered between home and the Keys, until all of sudden, life was changing again. His children got older and they started boating to the Bahamas, diving offshore, snorkeling, and fishing. Tim decided a twin-engine boat would be more suitable, so he sold the 273 and bought a Canyon 271 with twin 300s to keep in the Keys permanently. About three months later, with no boat in Vero Beach, Tim decided for the fist time ever to become a “two-timing man” as he purchased a 251 Coastal Explorer. This new Grady-White design was perfect for Vero Beach where he could fish the flats, cruise down the Intracoastal Waterway, and dock at area restaurants. 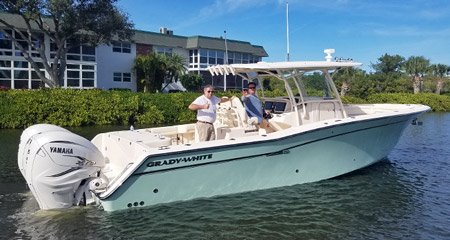 Three years later in 2018, with most of the kids off at college, the two boats weren’t getting as much use–life was changing again, and Tim couldn’t resist a change too! He purchased a Canyon 336 with new Yamaha twin 425s. About this boat, he said, “It’s perfect–I can easily and confidently take the boat between Vero Beach and the Keys, and if we’re out and a storm approaches, there’s plenty of space below to allow us to anchor and ride the storm out until we can get back to playing again.”

Tim often is asked if he thinks he’ll ever get a new Grady, and to that he replies, “If Grady-White ever came out with a large sportfishing or Express type boat, I’d be very interested. You know there’s a lot they can do with that 456 hull.”

Tim says that Grady-White has seen and acted upon the possibilities as they continue to build bigger and more innovative boats while maintaining their exceptional attention to detail, and that’s what keeps him coming back.

Stay tuned–you may see Tim in another issue of Docklines when he buys his eighth Grady-White. We know Vero Beach Marine Center will be ready whenever Tim is!