From a 52-foot cruiser to small lake boats, Dan Parks has owned more than 20 boats in his lifetime, but his new Grady-White Freedom 325’s ride and performance has made him a Grady customer for life.  “I won’t stray to another brand,” he says as he notes the many reasons why.

When Dan and his wife, Katie, decided to purchase a vacation home in Sarasota, Florida, they stipulated that the house had to have a dock with a lift. They were thrilled when the house they found came with a 32,000-pound lift. Once they had the property squared away it was time to find “the boat.” Dan looked at a number of boat brands, but one thing that kept him coming back to Grady were the beautiful lines and exceptional style of the boats. “Grady-White’s are just beautifully designed boats,” he noted.

In addition to preferring the look of a Grady-White to other brands, the Parks’ did have some experience on a Grady and they knew the quality of the brand. “We had taken several trips to Bimini and West End with a friend on his Grady-White Freedom 275,” said Dan. “I knew that boat rode well in three to four-foot seas.” He did a little research on Grady’s various dual console models and then called his local dealership Cannons and told them what they wanted. While Cannons didn’t have a 325 on the lot, they had other Gradys. Dan looked at the features and discussed the various aspects of the boat with the dealer. “Basically, I bought the boat having never set foot on one,” said Dan. “I built it online, then called and said ‘this is what I want’.”

Delivery day started out beautifully as they went through the boat with the dealer’s delivery captain, but as they got back to the dock they could see a storm was coming. Dan checked the radar and decided it wasn’t going to be a problem where they were headed so they set out for home. On their way the storm did come up on them. “It was a big storm,” Dan said. “It lasted about 45 minutes and I thought, ‘how is this boat going to perform in this storm?’” He went on to say, “It rode great! A real test on our first day out.”

Since taking possession in April, Dan and Katie have noted that the boat does a lot! “When I had a previous 32-foot boat on the lake I would have to slow down when it got rough or when going through a big wake, but not on the Grady – it just cuts right through it.” While they generally use the boat for cruising and relaxation, on Father’s Day Dan and a friend took the boat about 45 miles offshore to fish for snapper and grouper. “We caught dinner,” noted Dan, and went on to say that the boat performed great. Not used to driving a twin outboard boat, Dan was a little concerned. “I opted not to get the Helm Master, joystick but I did get a bow thruster and can say it’s been no problem learning to handle the twins. I couldn’t be happier with the boat!”

Soon Dan and Katie will celebrate their 35th wedding anniversary. Boating has been a big part of their life together. “We’ve done a major part of the Great Loop,” Dan noted. “Katie is a great boating partner, when we come into a dock I don’t even have to say a thing, she knows what to do and we work well together.” With their two sons and dog Milo, they have made boating a family affair. “I can say we are looking forward to many great days in the years to come,” and concludes, “With a 32,000-pound lift, who knows what our next Grady will be?” 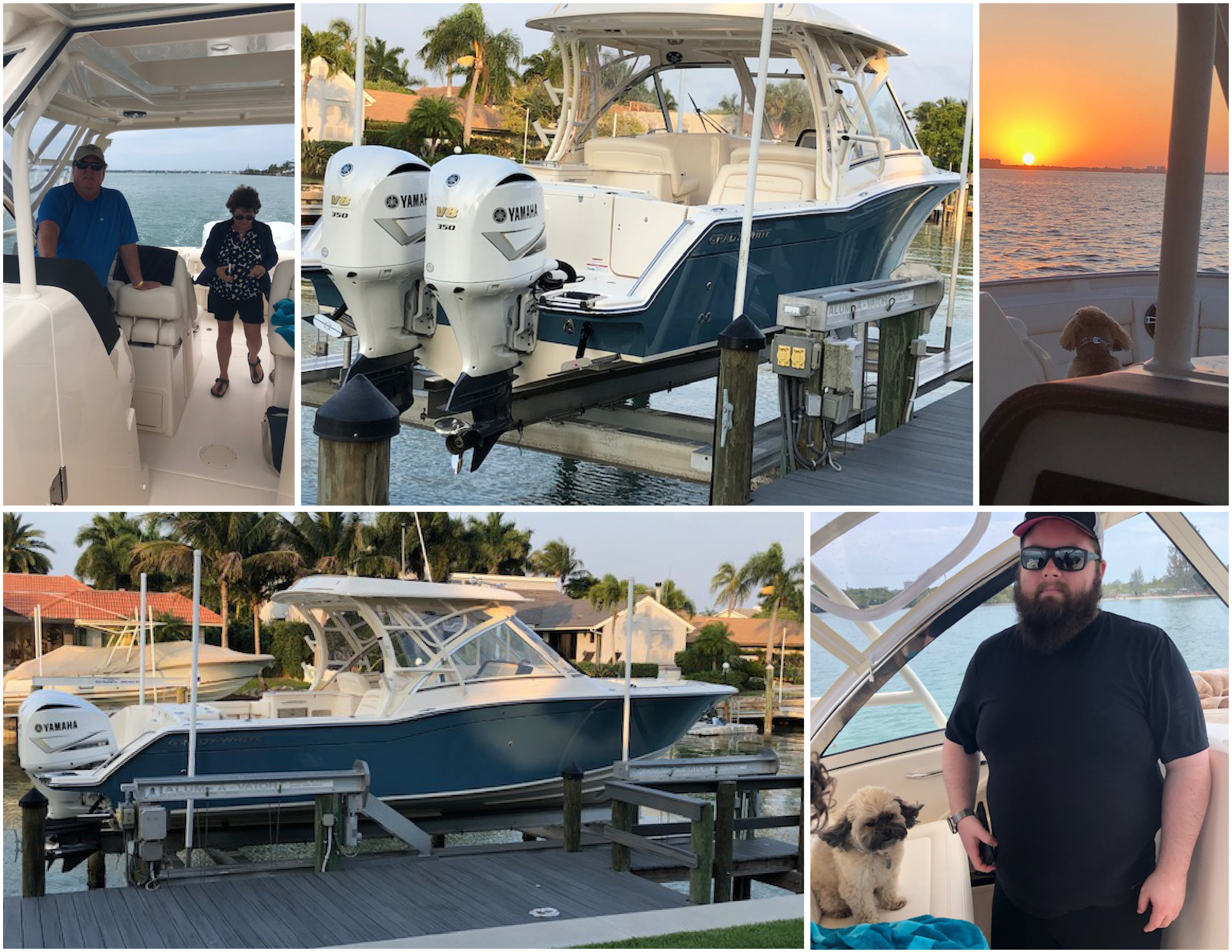