Mystery Boat Entices this Fanatic to Up His Grady Game!

Not only does this boat fish well – it is as beautiful to look at as the horizon on a terrific day! Grady-White Canyon 456, The Anniston Quinn. 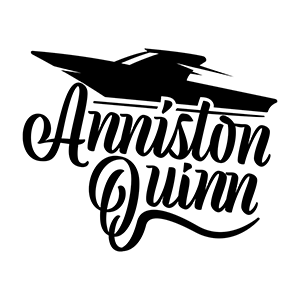 Sailing on Long Island Sound with his dad, and fishing with three older brothers off the pier, sparked this Grady Fanatic’s love of the water. However, it was the first exhilarating ride in a Grady-White boat–the purr of the outboard engines, the thrill of fishing offshore–that really hooked him! Now, years later, he often fishes 100+ miles off the North Carolina and Virginia shores, and frequently enjoys taking his children to play on the Wrightsville Beach, NC sandbars. This fanatic loves every minute of his Grady Life!

When Ben Zucker decided he wanted to buy a powerboat, a family friend advised him to consider a Grady-White. Together, they found the perfect Grady for Ben, a center console, Advance 257, in Sag Harbor, NY. Ben later trailered his boat to NC where he discovered the Wilmington coast and its great fishing opportunities. The solid, safe build, quick-to-the-fishing-ground-performance, and smooth, stable ride, all made Ben a Grady fan. Those qualities, as well as his local salesman, Chris Camp at Atlantic Marine, have kept him coming back for more Gradys year after year. Ben says Chris is the culprit behind his move from that first Grady to his second, and now he’s on his seventh!

In 2015, while in Wilmington on a rainy Saturday, preventing Ben from a day of fishing on his Advance 257, he decided to go check out the new boat models. He visited Atlantic Marine, met a salesman at the dealership, and in short order was convinced he needed to upgrade to the dual console Freedom 307. From that day forward, Ben’s relationship with Grady-White boats began to grow. After the 257 and the 307, there were several more Gradys in his life, but Chris grabbed Ben’s total attention in 2018 by sending him a photo of a “mystery” boat being trailered down I-95. In the picture was the back of a huge, shrink-wrapped boat, revealing only the four very large Yamaha 425 XTO motors on the transom. The photo pushed Ben’s hot button and he immediately wanted to know what this monster was. That was the prototype, Hull #1 of Grady-White’s brand-new Canyon 456, the largest boat ever built by the company. Ben traded in his Canyon 376 and quickly placed his name on one of the few remaining slots for the first year’s production of the new 456. While waiting, he bought another Grady, the Canyon 336, to fish on temporarily until the 456, arrived in June 2019. Naming the boat with his twin daughters’ middle names, the Anniston Quinn, Ben and crew immediately hit the fishing grounds hard, and have filled the coolers with all manner of prey from there on out. 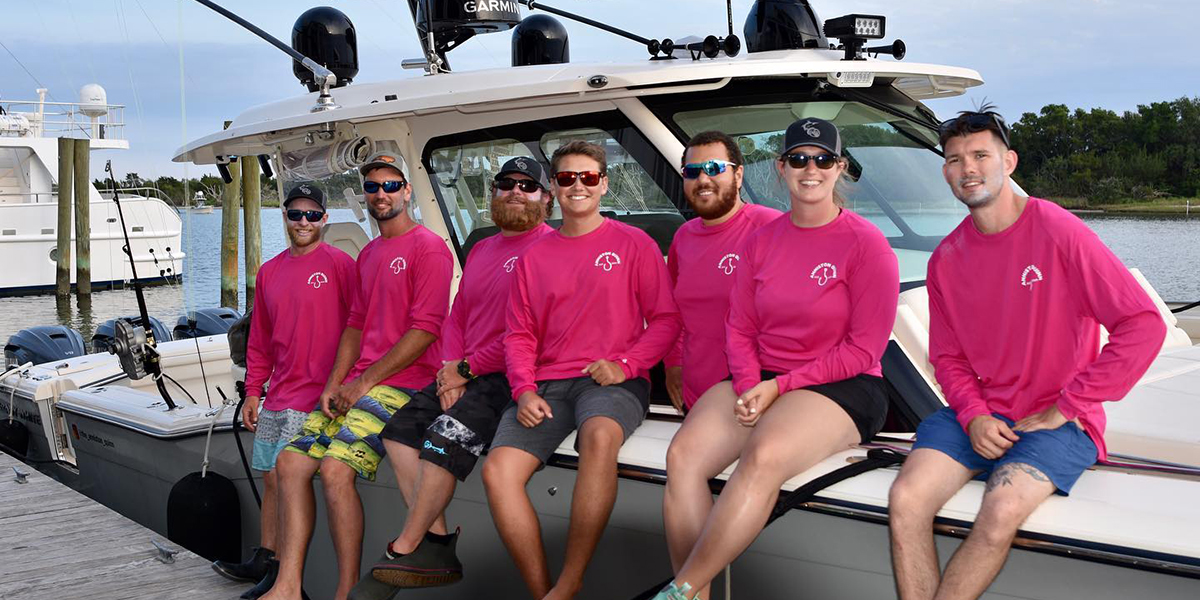 The Anniston Quinn’s Big Rock Blue Marlin Tournament crew had a great time fishing in the 2020 tournament and look forward to 2021. 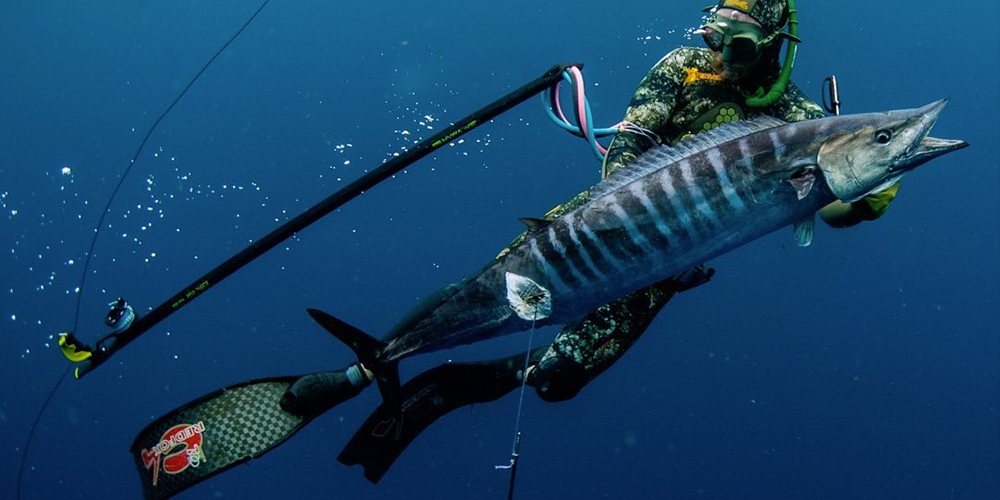 Got him! From trolling and spearfishing to everything in between, The Anniston Quinn is a real multipurpose boat for the passionate fisherman.

The Anniston Quinn’s Big Rock Blue Marlin Tournament crew had a great time fishing in the 2020 tournament and look forward to 2021.

Got him! From trolling and spearfishing to everything in between, The Anniston Quinn is a real multipurpose boat for the passionate fisherman. 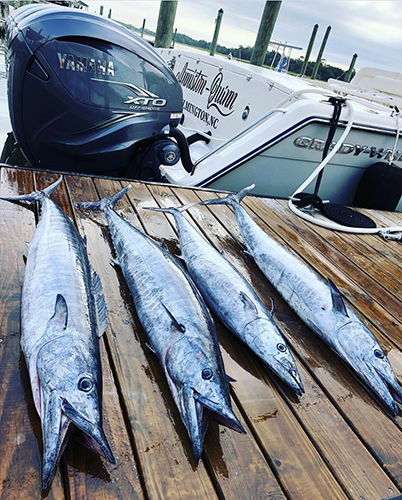 The crew of The Anniston Quinn is always testing new equipment and lures. Some new reels proved beneficial on this fishing trip.

The self-professed Grady man says what he loves most about the 456 is her performance, especially during fishing tournaments. When all the boats jostle for position to leave the dock together in the morning, The Anniston Quinn has the size, weight and performance to push through all the chop created by the other big sportfishers. Once out of the inlet, he puts the throttle down, taking advantage of the hull design and the horsepower, and easily passes them all. “Sometimes the name of the game in a tournament is getting out there the fastest,” says Ben, noting the Canyon 456 is quick and agile. That held true on the first day of the Big Rock Blue Marlin fishing tournament in 2020 when The Anniston Quinn was the first boat back to the dock for a dolphin weigh-in. Luck didn’t cooperate, so they didn’t bring home a win at the Big Rock, but they had a great time fishing out of Morehead City. While there, his boat had its own set of fans, which is pretty normal. Ben says everywhere he goes his 456 draws a crowd of admirers, offshore or at the dock. Morehead City is one of the stomping grounds for the Lady Grady (Hull #1), and it’s a special treat for Ben personally when he spots her out fishing or on the waterway–he smiles as he remembers that first picture that inspired him to buy the Anniston Quinn.

The 456 hull design, solid construction, and great performance that get him to the fishing grounds faster than other boats, are also what makes Ben and his crew so comfortable going far offshore. “Going 100 miles offshore is different from fishing the shorter distance where most boats usually stop,” Ben says. “You don’t have that ‘close to home’ feeling when you’re 100 miles out in the middle of nowhere, you need a boat that you know will get you home.” Of all the boats Ben has been on offshore, he’s always felt the most confident, secure, and comfortable when he’s on a Grady-White.

The Anniston Quinn powers past the big sportfishers heading out for a day of fishing in the 2020 Big Rock Blue Marlin Tournament in Morehead City, NC. Photo by: Down Sea Productions 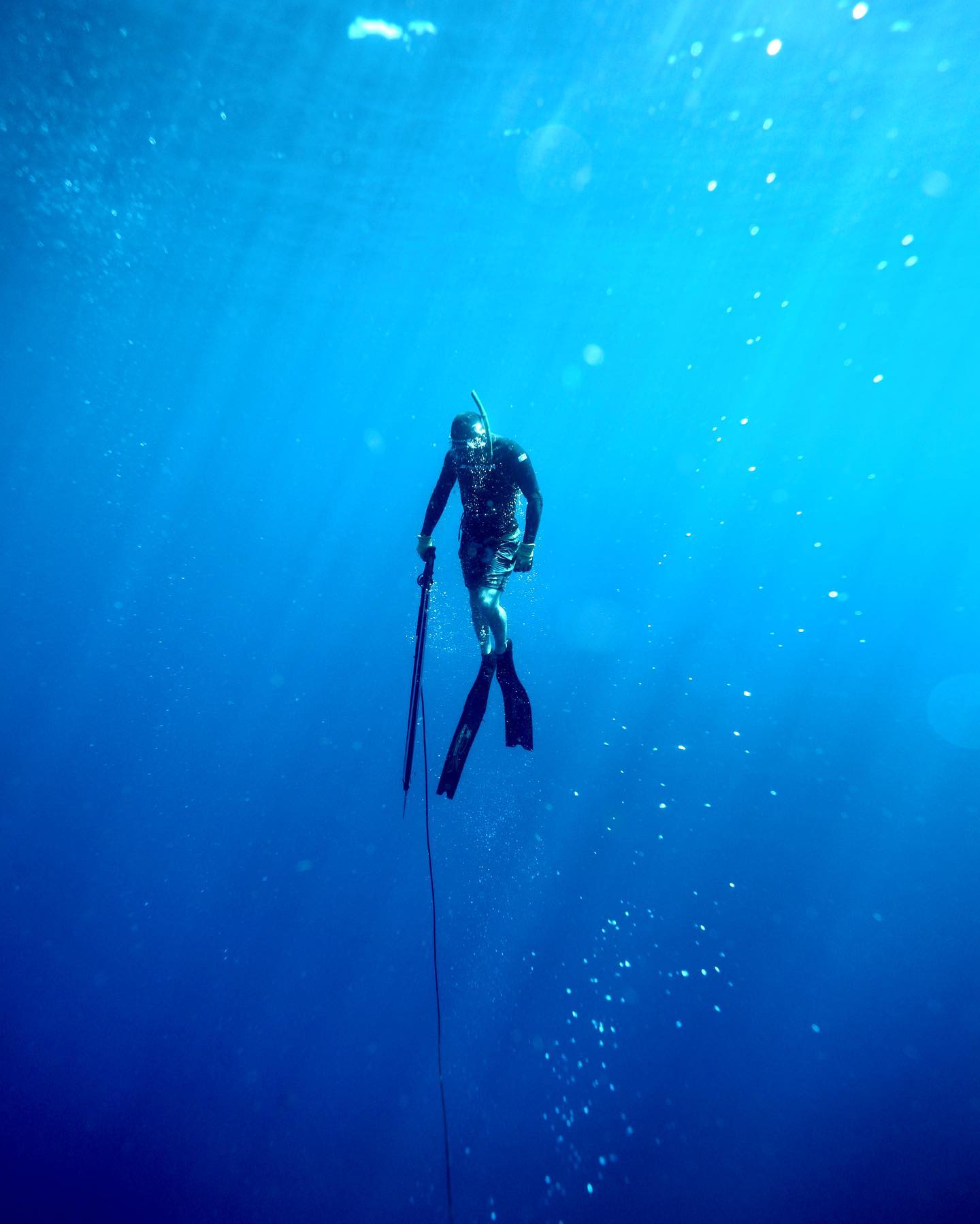 Always interested in expanding their fishing horizons, Ben’s crew has added spearfishing to their offshore activities. 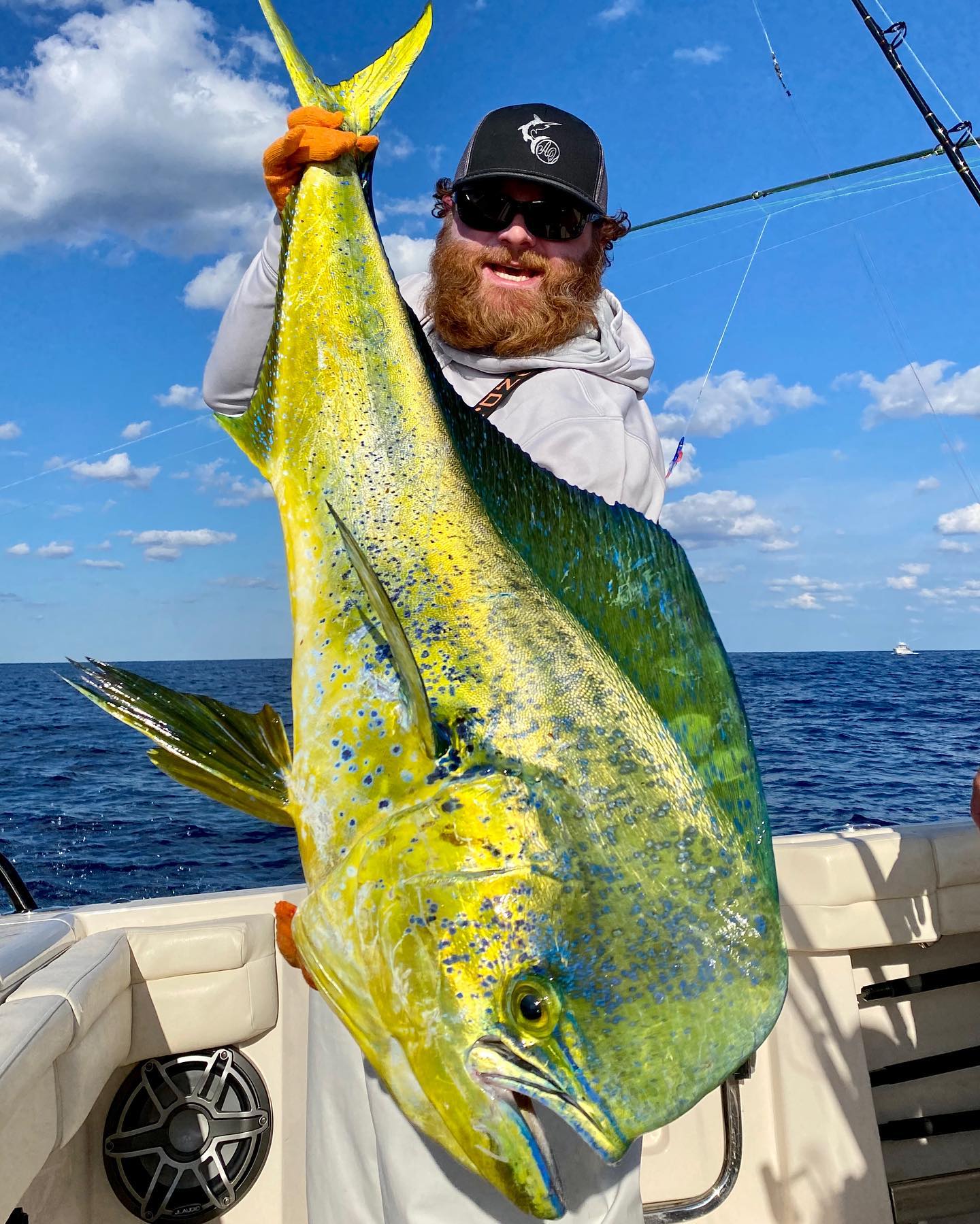 Another successful day for the Anniston Quinn! What a fish!

Always interested in expanding their fishing horizons, Ben’s crew has added spearfishing to their offshore activities.

Another successful day for the Anniston Quinn! What a fish!

But there was only one problem for this Grady fan – the Canyon 456 is better suited to offshore, blue water adventures, but Ben also needed a boat that was easy to beach when taking his family out for the day. In stepped his salesman Chris, who introduced Ben to Grady-White’s 251 Coastal Explorer (251 CE), which Ben soon added to his dock. Ben tells everyone the 251 CE is a great boat for a day on the water (or sandbar) with the family and it’s also just what they need to catch live bait inshore before they head out to the big water on the 456.

With 800 hours on the quad Yamaha 425 XTO engines, Ben runs the Anniston Quinn about as hard as a charter boat – focused on hard core fishing for just about anything. From trolling for tuna to spearfishing for wahoo, or even a mixed bag of Mahi, Cobia or bottom fish, he finds he can do it all from this incredible boat. The only thing that slowed Ben and his first mate, Hunter, down this fall was welcoming new members to their families – both girls, born just one month apart! Now in addition to fishing with the guys in 2021, Ben is looking forward to fishing with his daughters. “Santa brought the twins fishing rods this year, so the Anniston Quinn’s future has some female anglers coming along!” There is no doubt that the girls will learn the same love of the water their dad did back in Long Island Sound. 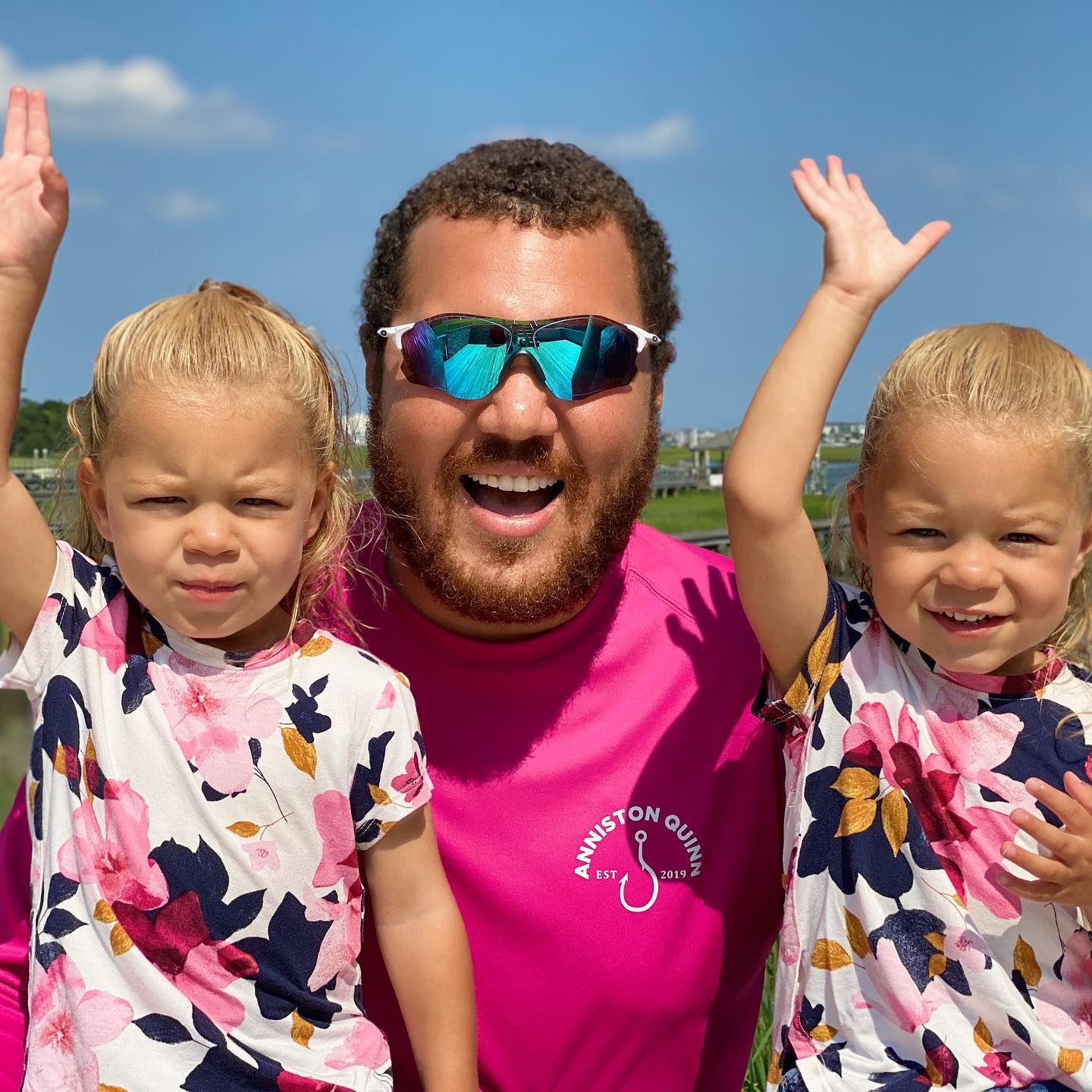 With twin daughters and their new little sister, there’s some real girl power on this boat! By the looks of it, Ben is as happy boating with the girls as he is catching a big fish! 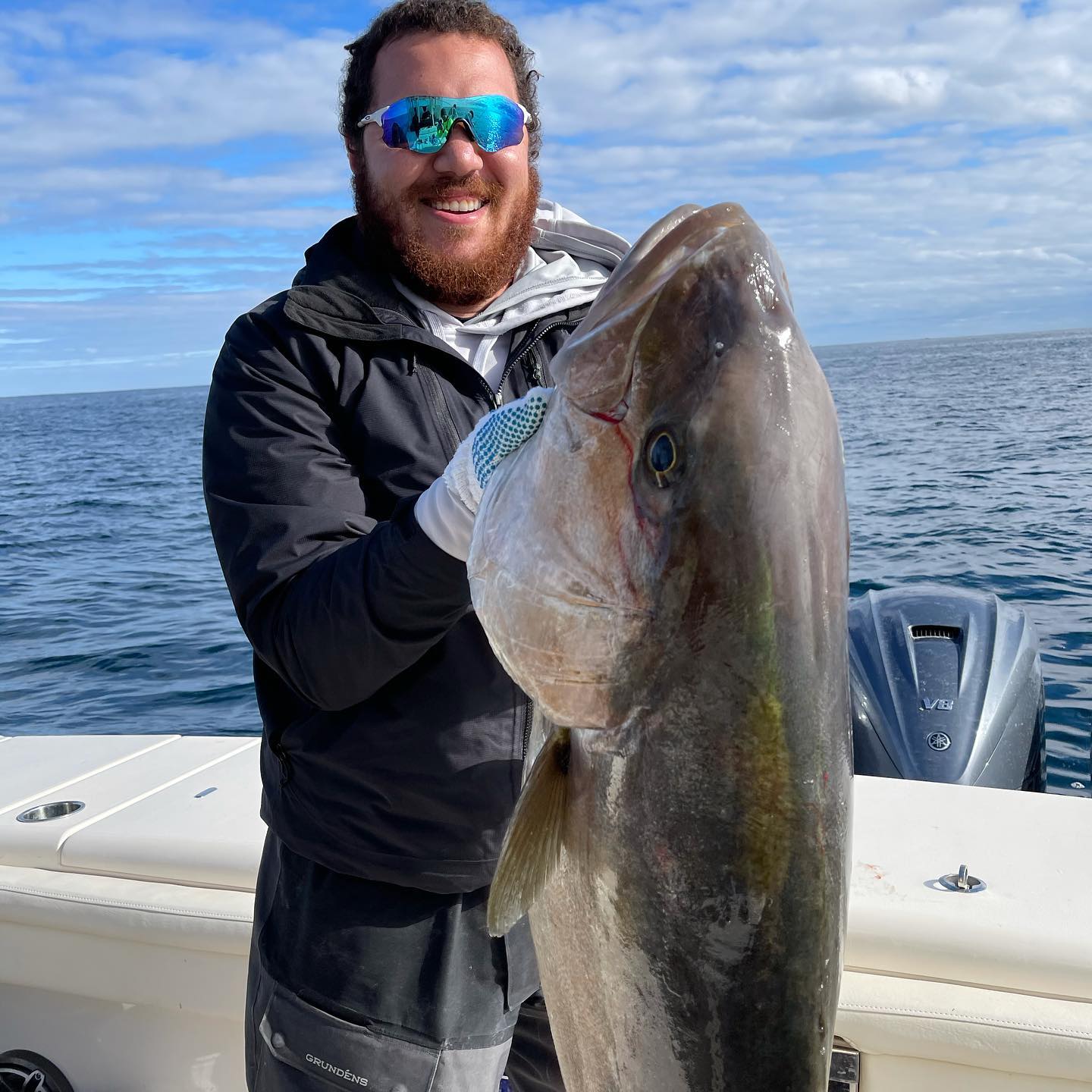 Anniston Quinn owner, Ben Zucker, smiles as he shows off another great catch!

With twin daughters and their new little sister, there’s some real girl power on this boat! By the looks of it, Ben is as happy boating with the girls as he is catching a big fish!

Anniston Quinn owner, Ben Zucker, smiles as he shows off another great catch!

Ben loves sharing the joy of fishing and boating with others. He notes that Grady owners are a great community of people; wherever he goes, he feels welcome. This year, he and his family are looking forward to making Wilmington, NC their primary residence so they can enjoy more fishing and cruising. If you want to keep up with Ben’s amazing Grady-White adventures, follow The Anniston Quinn on Instagram or his website theannistonquinn.com, where you’ll see exciting photos and videos of their excursions. Ben shares his adventures and his cooking skills, so if you can’t get out on your Grady right now, you can enjoy watching him and get inspired for your next Grady-White voyage!!