Love for Each Other, Boating and Their Gradys Runs Strong After 25 Years 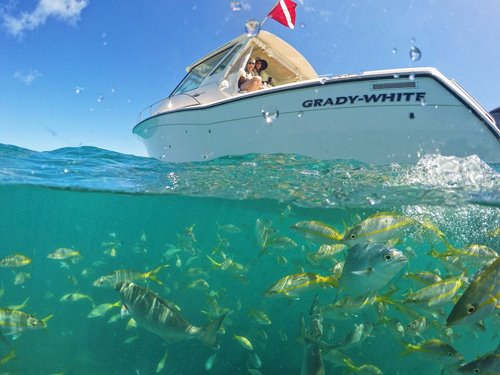 When Mike McCain and Debra Freeman started dating in 1994, they didn’t know where their shared love for boating would take them. But after 25 years, a growing family and eight Grady-Whites, their love for boating has expanded into a family affair.

One of Mike and Debra’s earliest dates was a dinner cruise from Ft. Myers Beach to Captiva. These two “seasoned boaters,” both confident in their navigational abilities, set off in Mike’s recently purchased 19-foot dual console, a Grady-White Tournament 19. Fortunately, the challenges of the trip didn’t foil their love of boating or enjoyment with one another as they beached the boat on a sandbar in the dark and spent several determined hours getting it back into the water. That began their 25 years together as Grady owners!

In 1996, the Tournament 19 was replaced with a Voyager 248, and Mike and Debra discovered the magical trick for keeping children happy while boating: cabins! Then weekend boating gave way to longer adventures fishing, snorkeling and diving. As their children grew, so did the Gradys, with a new Gulfstream 232 in 2002, followed shortly by a Marlin 300 in 2003. Trailer-free, they learned to navigate through Florida Bay, avoiding any sandbars, to make annual treks to the Keys and the Dry Tortugas.

In 2005, they christened a new Express 330, Doctor’s Orders, and in 2007 bought the same model again noting, “Between 2005 and 2007, Grady-White upgraded to Yamaha 300s and changed the design of the cabin door. We probably would have purchased the Express 360 then, but our canal wasn’t deep enough to accommodate the draft.” Moving to a marina for deeper water access allowed them to upgrade to the Express 360 in 2013. On that boat they spent the better part of a decade watching their “Grady Crew” expand from their children to their brothers, nephews, nieces and many close friends.

The children are now adults, with significant others of their own, and on a return trip from the Keys last summer they knew it was time for something different. When talking about their new Freedom 375 dual console, Mike and Debra said, “We shopped other vendors briefly but ended up right back where we started–with a Grady-White. Without a doubt, this is our favorite Grady to date!”

Sandbars long behind them, Mike, Debra and their extended family love being part of the Grady-White family and look forward to many more years on the water!