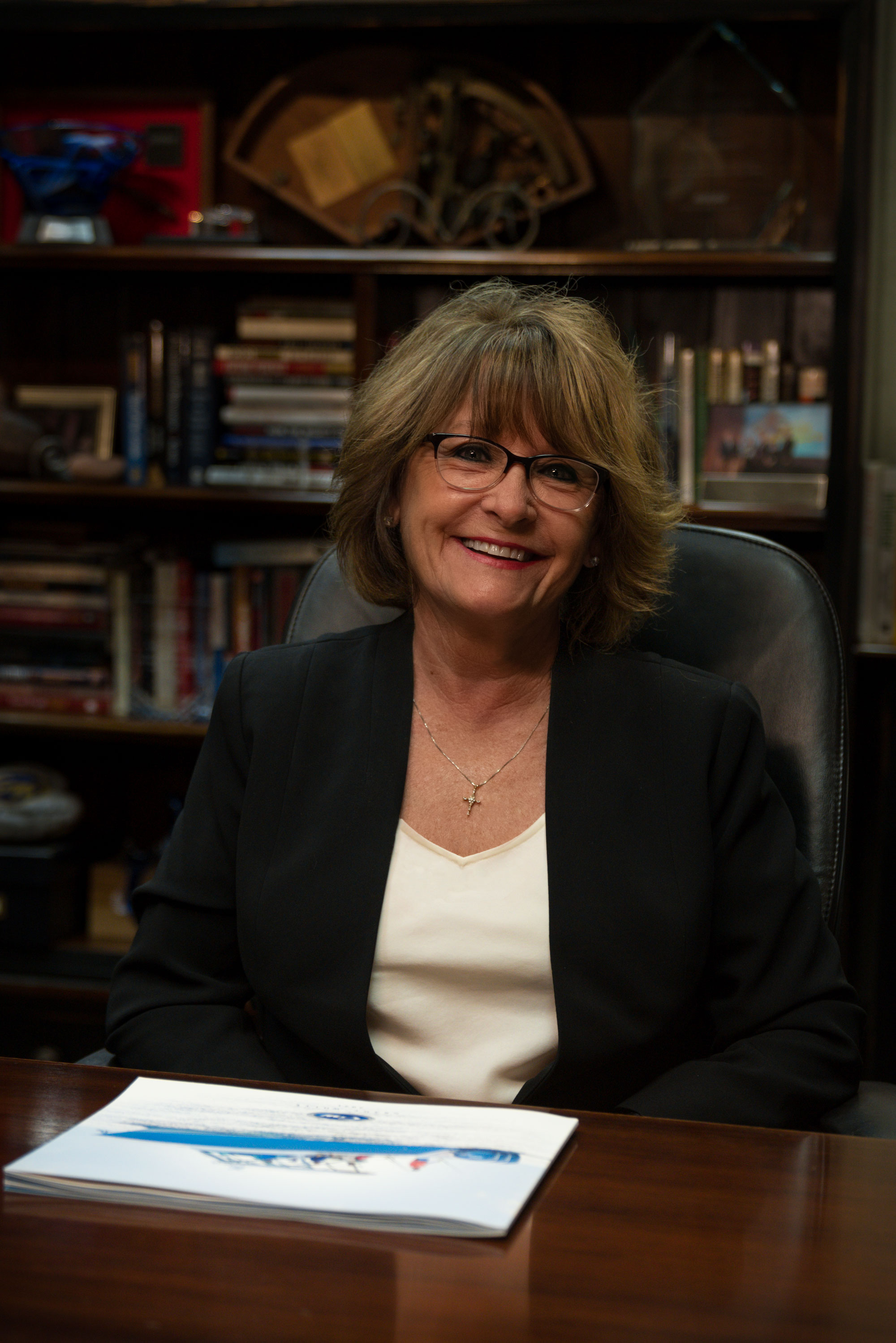 Greenville, NC – Sept. 21, 2020 – The National Marine Manufacturers Association (NMMA) announced the induction of Kris Carroll, president of Grady-White Boats, into the NMMA Hall of Fame. Carroll was presented with the 2020 NMMA Hall of Fame Award – the Association’s highest honor – during the Opening Session of the 2020 IBEX Online: A Virtual Experience on September 29th.

“I’m humbled and privileged to bestow the 2020 NMMA Hall of Fame Award to Kris Carroll, for her 45 years of dedication, love and service to Grady-White and the recreational boating industry,” said Frank Hugelmeyer, NMMA president. “It is a particular honor to note that as our first female recipient, Kris has blazed a trail for future female marine leaders, and her legacy will be imprinted on our industry for generations to come.”

Following a friend to Greenville, NC from Massachusetts in 1975, Kris (Keesler) Carroll knew she needed to find a job quickly so she could eat!  She took a job as a production control clerk at Grady-White Boats.  Kris always wanted to do the best at anything she ever did, so she learned everything she could about her job and the company.  Kris did what she was asked and then, by her nature, gave some more, which always led to greater opportunities and responsibilities.  She also naturally embraced the principles that the owner, NMMA Hall of Fame member, Eddie Smith, believed in, including strong dealer relationships, listening to customers and putting them first.  Always looking for ways to make the company more effective, she was moved to engineering as a clerk, working her way up to leadership in that department.  While there, she served as a member of the NMMA Technical Committee for 10 years.  In 1987, she was promoted to Vice President of Engineering, and in addition became Vice President of Manufacturing in 1989.  Promoted to Executive Vice President in 1992, Kris ushered in the next stage for Grady-White’s growth, building on Eddie’s established legacy.   Selected by him for her skills in leadership development, team-building, and strategic planning, she became President in 1993.  She was the first woman to work her way up through the ranks to become president in the boat manufacturing industry. Then as now, Kris leads Grady-White in her vision, “Together, Delivering the Ultimate Boating Experience” to customers, while fostering a company culture where everyone “Enjoys coming to work on Monday...like they enjoy going home on Fridays.”

Enhancing Grady-White’s brand further, Kris has taken Grady-White to the top of the industry through her passionate belief in creating exceptional one-on-one relationships with customers.  This commitment results in Grady-White ranking at the top of every third-party customer satisfaction measure ever done, including NMMA and J.D. Power.

“Kris has been a mentor to so many in the boating industry. Throughout her career, she committed herself to the improvement of both Grady-White and the entire boating ecosystem,” noted Ben Speciale, Yamaha Motor Corporation, president Yamaha Marine Business USA. “Her ability to assemble and inspire, her steadfast beliefs, genuine attitude and hard work set an example for all of us. Congrats to my deserving colleague and friend on the NMMA Hall of Fame!”

Kris is now in her 5th decade of serving the recreational boating industry, which stemmed initially from Eddie’s principle of being deeply committed to the industry, conservation and advocacy.  She continues to hold active leadership roles in the industry, in advocacy and her community. She is currently serving on the Board of Directors for the NMMA and the Board of Directors for the North Carolina Chamber of Commerce. She has served on the Advisory Council and Board of BoatUS, the Board of the Center for Coastal Conservation (now Center for Sportfishing Policy), and is the past chairwoman of the NMMA Boat Manufacturers’ Division Board.

An early champion of the BoatPAC and industry advocacy, Kris has fought her entire career to ensure that issues vital to recreational boating are front and center with the nation’s decision makers.

“She has always stepped up, for her company, for her peers, and for the industry, and in turn she’s taught us all to step up,” said Joe Neber, president, Contender Boats Inc.

“Kris embodies all the traits, characteristics and accomplishments of a Hall of Fame member.  She has recruited many industry leaders to join the NMMA Divisional Boards and shared the gifts of her time, experience, knowledge and friendship,” echoed Joan Maxwell, president, Regulator Marine. “I am grateful for Kris’ mentoring and most of all for her friendship. Proverbs 27:9 says ‘A sweet friendship refreshes the soul.’  Thanks, Kris for refreshing my soul!”

Industry accolades include the Marine Retailer Association of the America’s 2002 Darlene Briggs Woman of the Year Award.  She has also been celebrated by the Center for Sportfishing Policy with the 2012 Eddie Smith Manufacturer of the Year Award for her dedication to conservation efforts and service to the organization and the Board, as well as the NMMA’s 2018 Hammond Marine Leadership Award honoring her advocacy efforts.

Kris makes her home in Greenville, NC where her love for the community has led her to contribute both her time and resources toward its betterment. She served on the Pitt County, NC United Way board, and is a staunch long-time supporter as a DeTocqueville Society level donor.  She provides leadership for many community outreach programs, such as STRIVE and PCC’s Visions program, as well as speaking often to local groups like the Teacher’s Executive Institute, Pitt Community College, and East Carolina University.  She has always had a heart for those who struggle and personally contributes to many initiatives for those in need in the community.  She lives her personal mission everyday: to help others be the best of who they are meant to be, whether in her community, in the marine industry or at Grady-White Boats. Kris feels incredibly thankful to call Eastern North Carolina home and grateful to work with a talented team of employees, suppliers, dealers and leaders across many industries and organizations throughout her life and career thus far, and looks forward to meeting and serving alongside many more in the years to come.

Founded in 1959, and owned by NMMA Hall of Fame member (2002), Eddie Smith, since 1968, Grady-White Boats builds 26 models of luxury fiberglass offshore, sport fishing and family fishing boats (18-45 ft.). The company has been awarded every third party customer satisfaction award ever presented in the marine industry, including all 8 of the J.D. Power and Associates awards for their category and all 18 years of the NMMA Customer Satisfaction award consecutively. Visit www.gradywhite.com to learn more about their history, their unique boats and exceptionally detailed craftsmanship.

The NMMA Hall of Fame was established in 1988 and recognizes individuals who have made, or continue to generate, substantial and lasting contributions toward the advancement of the marine industry. It honors individuals whose names and deeds are synonymous with the pursuit of quality, innovation, and perfection within their respective spheres of expertise.

Find more information about the NMMA Hall of Fame here.