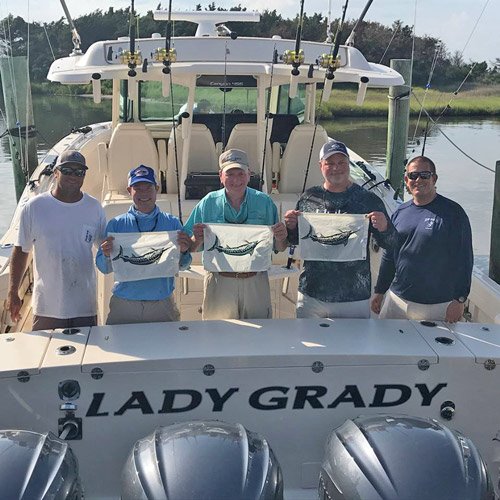 There were exciting results in the prestigious 2018 Hatteras Marlin Club Release Tournament! On her maiden tournament outing, Grady-White’s new outboard powered flagship, the 45-foot Canyon 456, went three-for-three on blue marlin and thrilled the captain and crew, as well as everyone back at the Grady factory in Greenville. Company owners Eddie and Chris Smith were pleased and proud to celebrate the tremendous accomplishment of this new boat model. Catching and releasing a marlin on each day of fishing made for a memorable trip, and a fourth place finish out of a group of 40 participating boats, most being large, experienced inboard sportfishers, topped it all off. Cameron Boltes, captain for the Lady Grady, said, “The Canyon 456 is a great boat to fish. The design and layout has everything we need, and the performance of the Yamaha HelmMaster and new Yamaha 425 HP engines was awesome.”

The 456 proved to be nimble, with no need for “backing down” during the fight (maneuvering at high speed in reverse), making the catch and release smoother for angler and fish. Aboard the Grady, thanks to the rock solid 14-foot beam center console design, the “hooked up” anglers could easily move to the bow. Unlike the inboards, the 456 could chase the hooked marlin in forward gear, allowing the Grady team to more quickly gain back line. These factors contributed to rapid fights and healthier releases on all three of the crew’s magnificent gamefish.

As if all of that weren’t enough, the new Grady was incredibly fast and fun to ride, beating the fleet to the fishing grounds and back to the dock at the beginning and end of each day of the tournament. The Canyon 456 is equipped with quadruple Yamaha 425 HP outboards (a total 1700 HP) and Yamaha’s HelmMaster with Set Point system, giving the ultimate in control. Combined with the unbeatable ride of Grady-White’s exclusive SeaV2® hull, and the Seakeeper stabilizer, the 456 offers phenomenal cruising speeds and a seaworthy, smooth, dry, and steady ride.  Generous seating for seven under the huge T-top also contributes to comfort and security.

With a performance like this, Grady’s new Canyon 456 establishes itself as a serious purchase consideration for any avid or aspiring billfisherman.