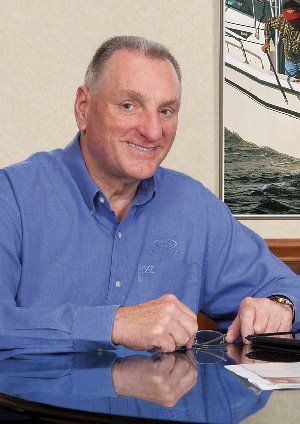 GREENVILLE, NC (February 13, 2019) – Recently Grady-White Boats and its owner, Eddie Smith, were honored with not one, but two, awards centered around the company’s dedication to the community.

Grady-White builds 27 models of fiberglass offshore, sport fishing, and family fishing boats ranging from 18 to 45 feet. It presently employs about 350 people. Grady-White’s 60-year track record of pioneering designs, amazing craftsmanship, superb engineering, and exceptional customer service is unmatched by any other company in the industry.

There they noted that for more than 60 years, Grady-White Boats has been an integral part of Greenville’s industrial sector, expanding its manufacturing facility, investing millions of dollars and creating new jobs in the region.

On February 8th, community leaders came to the Grady-White facility to announce their selection as Pitt County’s Industry of the Year for 2018-19. Each year, the Pitt County Development Commission recognizes a manufacturer or distributor that best represents the community as a model corporate citizen.

“Grady-White is a great example of the substantial impact existing industries have on our economy and the need to support and invest in their growth in our community,” says Brad Hufford, Associate Director, Pitt County Development Commission. “They have brought manufacturing jobs to our region incrementally and through expansions over the years, have weathered recessions, have innovated to stay on top in the industry, and have given back to the community in many ways. They are a great company and a great corporate citizen.”

Grady-White Boats was founded in 1959 and has been under continuous private ownership since 1968 by Eddie Smith, National Marine Manufacturer’s Association (NMMA) Hall of Fame member. The company moved to its current site in 1972, breaking ground for a modern manufacturing facility in Greenville, NC.

At the 2018 Miami Boat Show, Grady-White wowed crowds with the introduction of the new flagship Canyon 456, and in March of that year the company announced the expansion of their manufacturing facility. The expansion added more than 70,000 square feet of space and 65 new jobs. This expansion is the latest in a long line of additions and improvements Grady-White has made, nine times over the years, to its corporate headquarters here in Pitt County, which is its one and only facility.

The company invests in its employees and gives back to the community it has called home for six decades. Among the organizations and entities that it supports are LIFE of NC, the ECU Foundation, Food Bank of NC, Boys and Girls Club, ECVC, Uptown Greenville, Vidant Health Foundation, Greenville Little League, Humane Society of Eastern NC, Literacy Volunteers, Building Hope, and many more.

“We are honored by the recognition Grady-White and Eddie Smith have received from both ECU and the Pitt County Development Commission,” noted President Kris Carroll, adding, “our relationship with the community is as greatly valued as those with our employees, vendors and customers.”

The Pitt County Development Commission is proud to honor Grady-White Boats for its long history of innovation and success and its many contributions to Pitt County.