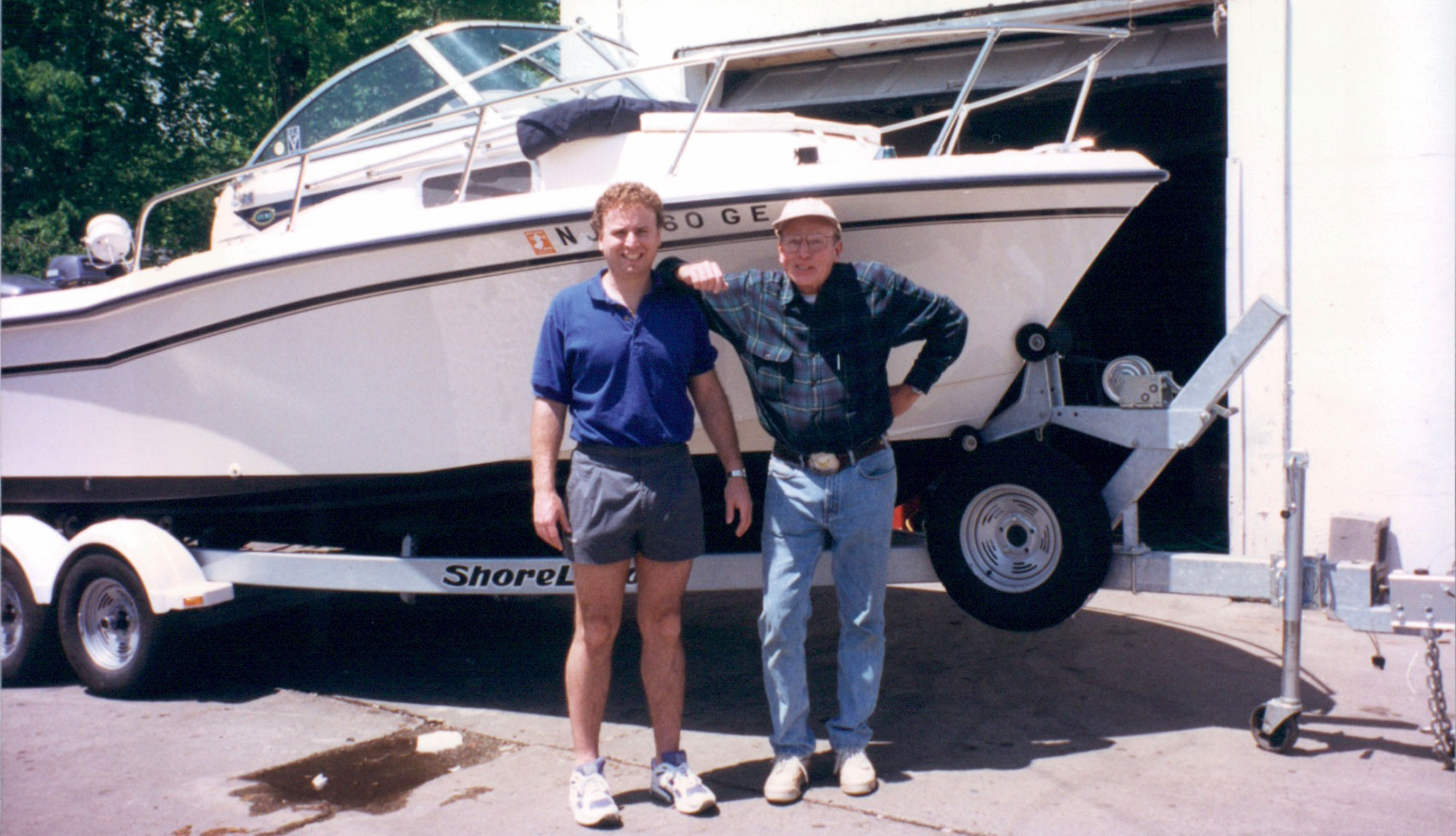 Roger and his dad, Roger Muller, Sr. pictured in front of their first Grady-White, an Adventure 208 they bought in 1998.

What started as family adventures along the shoreline turned into years of escapades on the water for this eight-time Grady-White owner. Roger Muller grew up fishing with his father and mother, but they always fished from the shore. It all changed when a family friend, Dr. Robert Eramian, invited Roger and his parents to fish on a boat. Roger was introduced to a new way of life – one that was destined to shape his future activities, and his children’s idea of fun and excitement.

After that momentous fishing excursion, he was “hooked” and decided he wanted a boat of his own. Roger wasn’t specifically looking for a Grady-White boat, but you could say the Grady found him!

One day while driving by his local boat dealership, he looked at the gleaming new boats and thought, “WOW, those boats are beautiful!” He went into the dealership to take a look, and the salesman showed him all the features and benefits that make Grady-White a unique boat brand. That led Roger, along with his father, to purchase their first boat, a Grady-White Adventure 208. This boat began Roger’s love of all things nautical, especially Grady-White boats. Now, after owning eight Gradys, Roger emphatically says, “Grady-White boats are truly the highest quality, unsinkable, solid constructed boats with the most beautiful lines!” 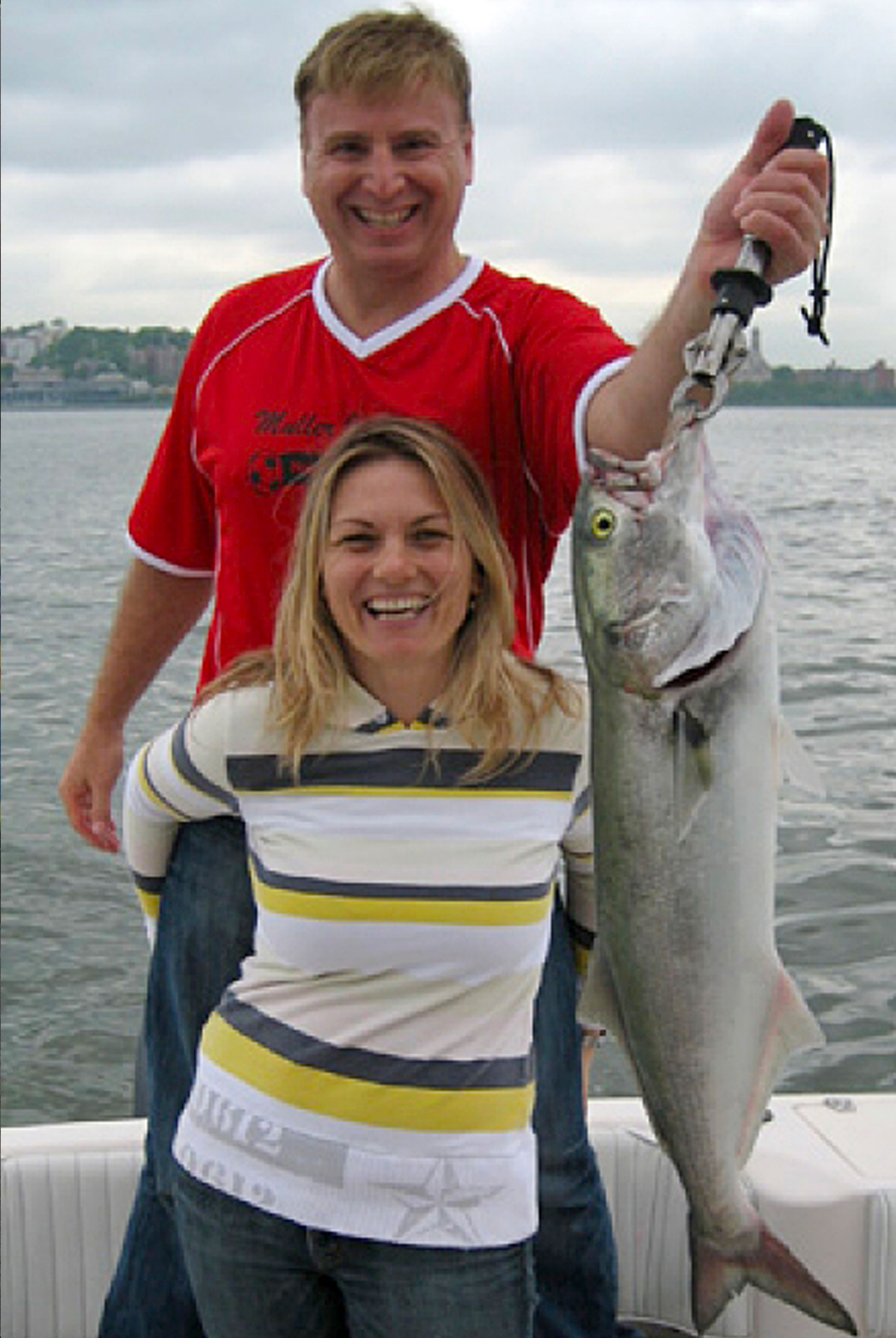 Roger’s wife, Andrea, caught her first bluefish weighing 7 lbs. 2oz. off Bayonne, NJ, on his Marlin 300. He says she can really fish! 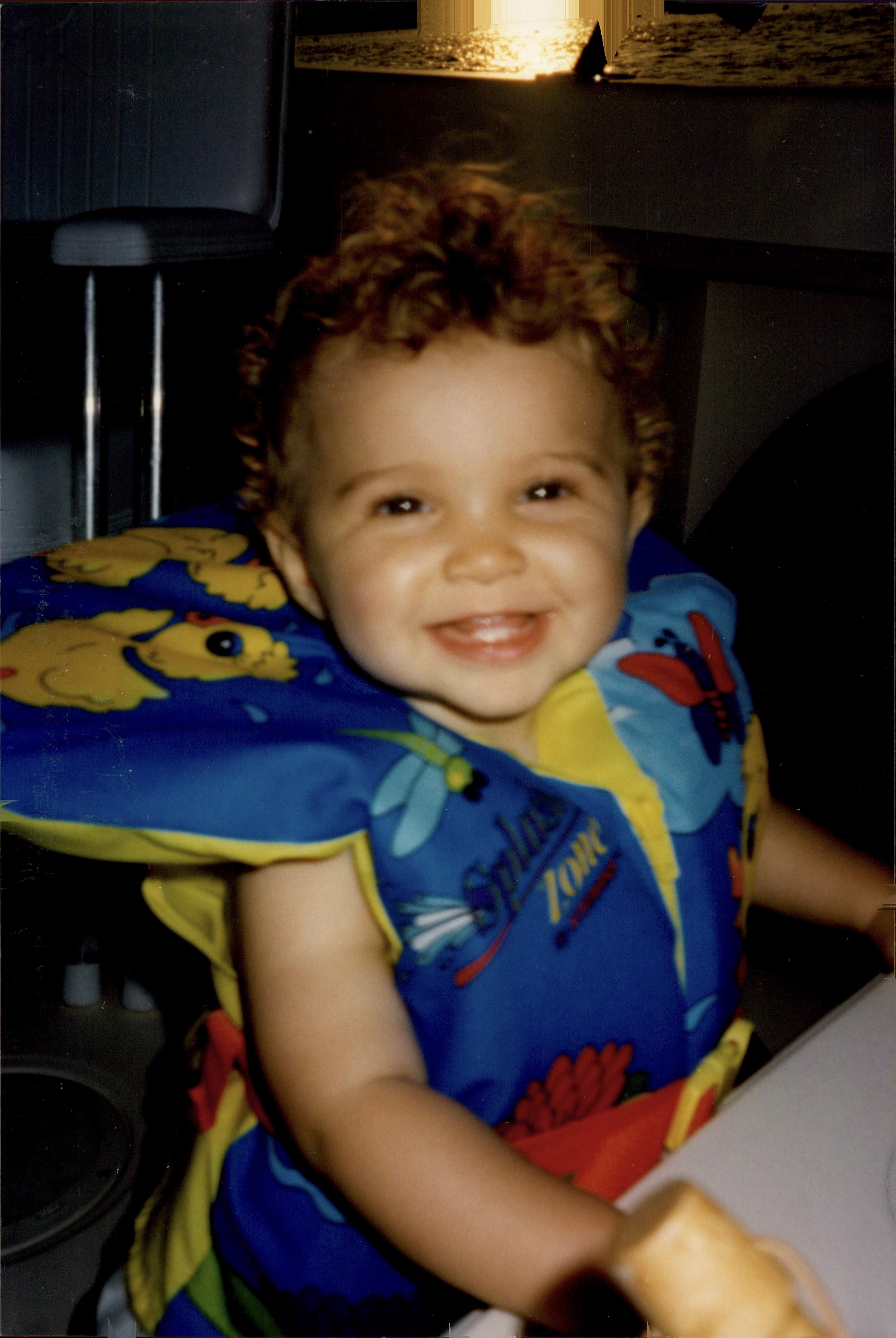 Roger started boating with his daughters, Kelsey and Taylor, when Taylor, the youngest, was only two years old!

Roger’s wife, Andrea, caught her first bluefish weighing 7 lbs. 2oz. off Bayonne, NJ, on his Marlin 300. He says she can really fish!

Roger started boating with his daughters, Kelsey and Taylor, when Taylor, the youngest, was only two years old!

Continuing a more than 115-year family legacy, Roger now owns his family’s insurance business, but he also has a passion for conservation which led him to obtain a degree in Environmental Science. He feeds that passion with his involvement in a number of organizations including Lionfish University, the American Littoral Society, the Hudson River Fishing Association (HRFA), American Angler, and the Professional Association of Diving Instructors (PADI). His work with these organizations has garnered him several accolades. In 2016, PADI recognized him with their annual President’s Award. The Lionfish University, which works to remove invasive lionfish in non-native areas, named him Field Reporter of the Year in 2019. Tagging fish and documenting his catches, as well as the fish he encounters around his boat, is another one of Roger’s endeavors through his work with the American Littoral Society, an organization whose mission includes promoting the study and conservation of marine life and habitat. 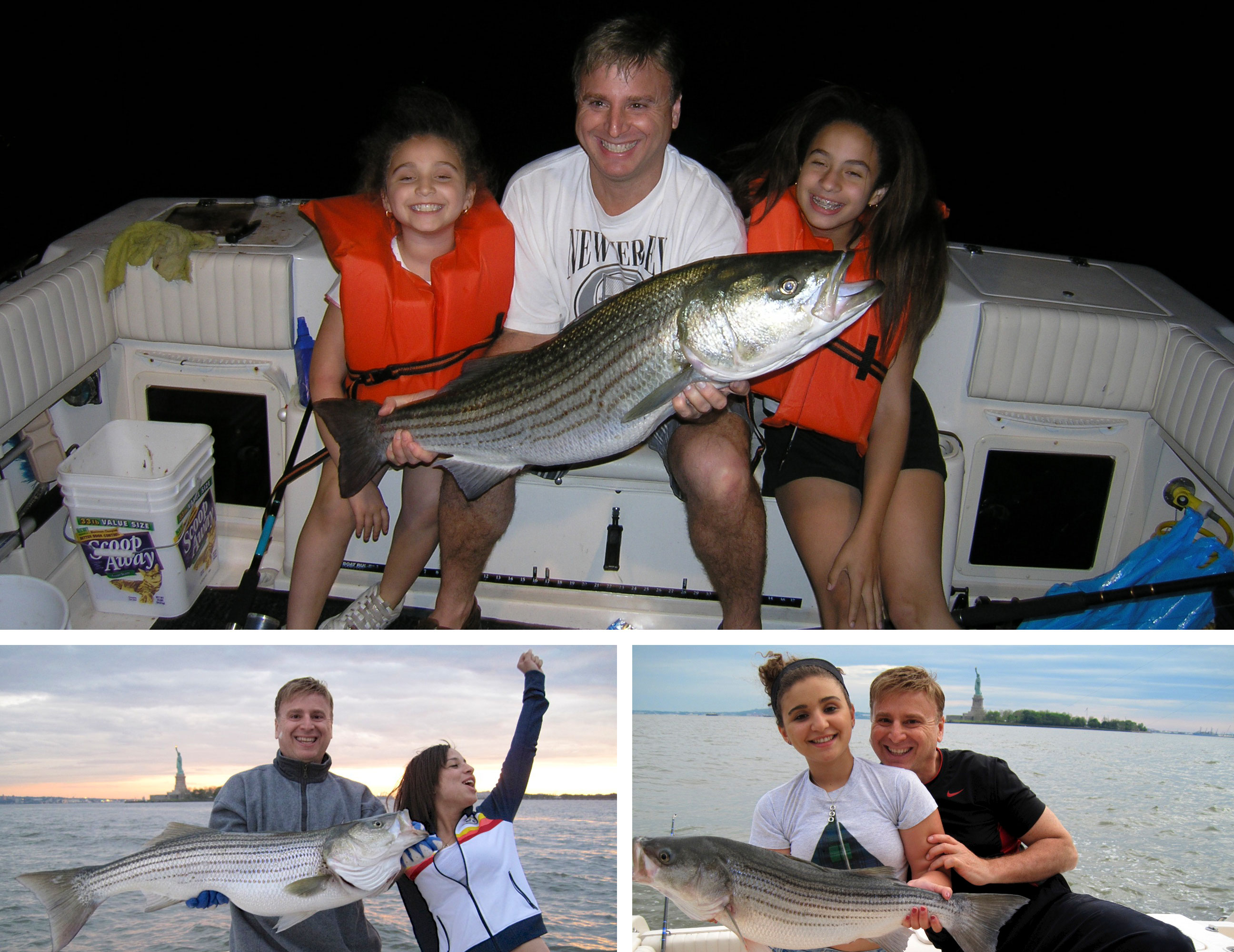 Roger proves you can still connect with your teenage girls if you instill in them a love for boating and fishing when they’re young.

While Roger and his crew are fishing, he often places a GoPro camera underwater to observe the fish, giving him a unique view of the activity and a way to answer some of the mysteries they encounter. Recently, something hit the line but wasn’t caught. They could see mahi everywhere and were perplexed why none of them would take the bait. Upon review of the footage, Roger noted that the bait had been damaged by the original strike from a blue marlin, so when the other fish came up to it, they turned away.

Two years ago, they were trolling for mahi when the line went down. They could see they had caught a little mahi, but then suddenly the line was hit again by a bigger fish. Roger took the rod and cranked it about five times. Frustrated because he thought it was a shark, he handed the rod off to his eldest daughter, Kelsey, who cranked it about five times and then passed it off to Roger’s friend, Russ. Eventually, Captain Russ Jacobus pulled in the 50-pound bluefin that had eaten the mahi!

In 2018, Roger bought a Grady-White Canyon 306 center console. He loved the boat, but in 2019 he decided to return to a cabin model and purchased an Express 330, noting that “the Express is just better for the chilly weather we have here and allows us to use the boat more in the colder seasons when the fishing is still really good.” He explained that he ordered the optional integrated hardtop with helm enclosure so that he and his crew would be shielded from wind and spray on cooler days. Praising the boat’s design, Roger said that “it gets so toasty in there, we have to open the window!” In fact, his fishing buddies say it’s like being indoors, the seats are comfortable, and it’s such an enjoyable experience being out on that boat. While he currently uses rods to fish all over the waters of New York and New Jersey, both inshore and offshore, Roger is also a professional scuba instructor with more than 130 certifications and hopes to soon start doing some local spearfishing too.

Roger and his parents, Roger Sr. and Hetty Muller, shared lots of time together fishing on their Grady-White boats.

During the Muller’s early boating years, Roger and his family did a little bit of everything. Of course, fishing with his parents, Roger Sr. and Hetty Muller, and father-in-law, Eddy Fortes, was included. He also fondly recalls some special moments with his daughters, Kelsey and Taylor, beginning with the first time he took them out on the boat. He buckled the life jackets on them both, and they happily enjoyed the ride. From that day forward, both girls loved the fun that boating brought to their family. From swimming, fishing, scuba diving, and tubing to just relaxing and visiting places that can’t be seen by car, boating truly brought their family together. Today, along with Roger’s wife, Andrea, they are all about fishing, and their boating family has grown to include Kelsey’s husband, Chris Sun, and Taylor’s boyfriend, Devin Hines.

Roger and his family take friends out often and recommend boating as a terrific family activity to all the people they meet. “My girls grew up spending most of their lives on Grady-White boats, it is always a great way to spend time together,” says Roger. “Thank you to the Grady-White team for the great memories with family and friends you’ve given us, and continue to give us, on our Grady-White boats!” 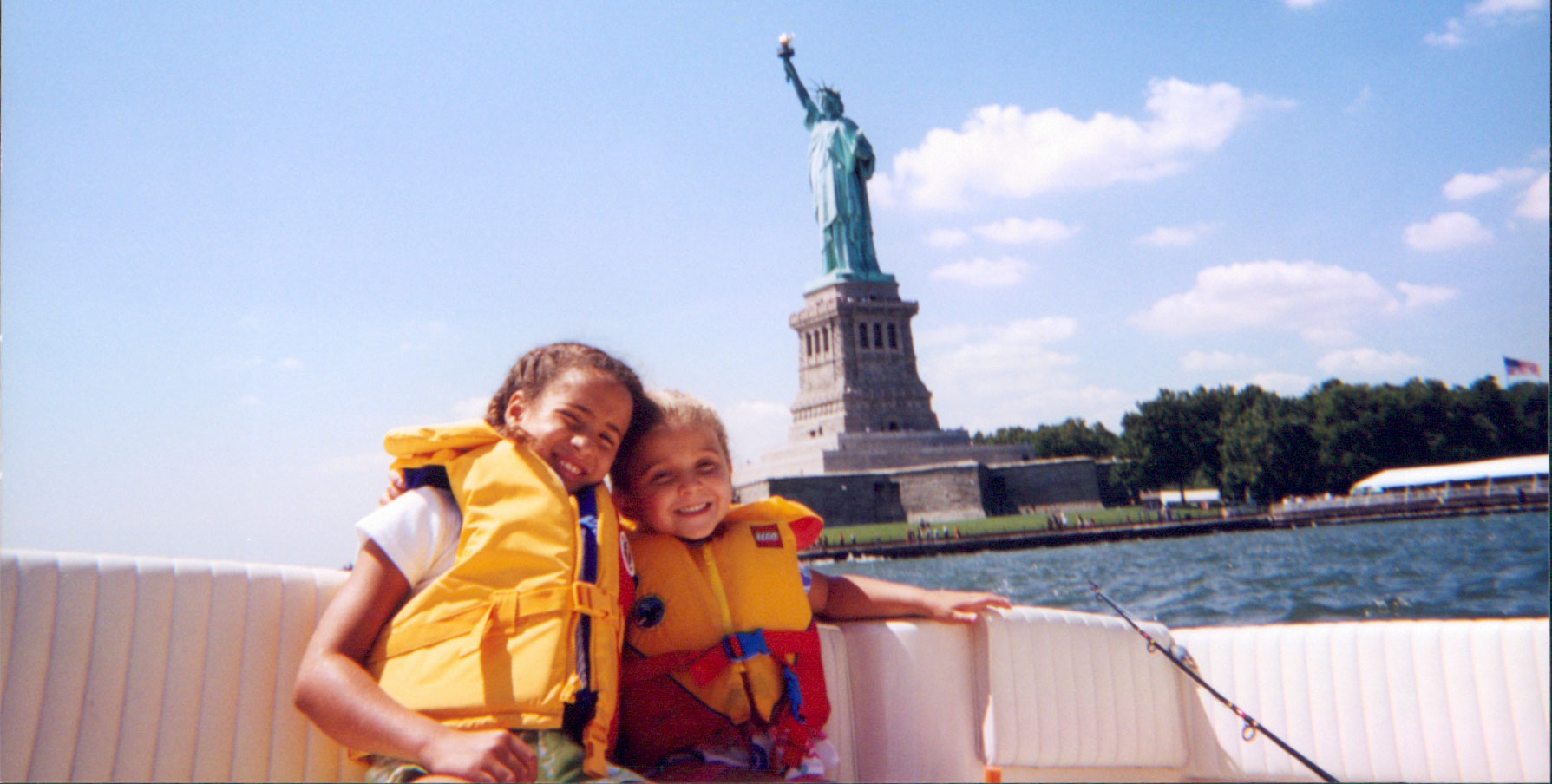 Kelsey and Taylor have been sightseeing by boat as they pose with Lady Liberty in the background. 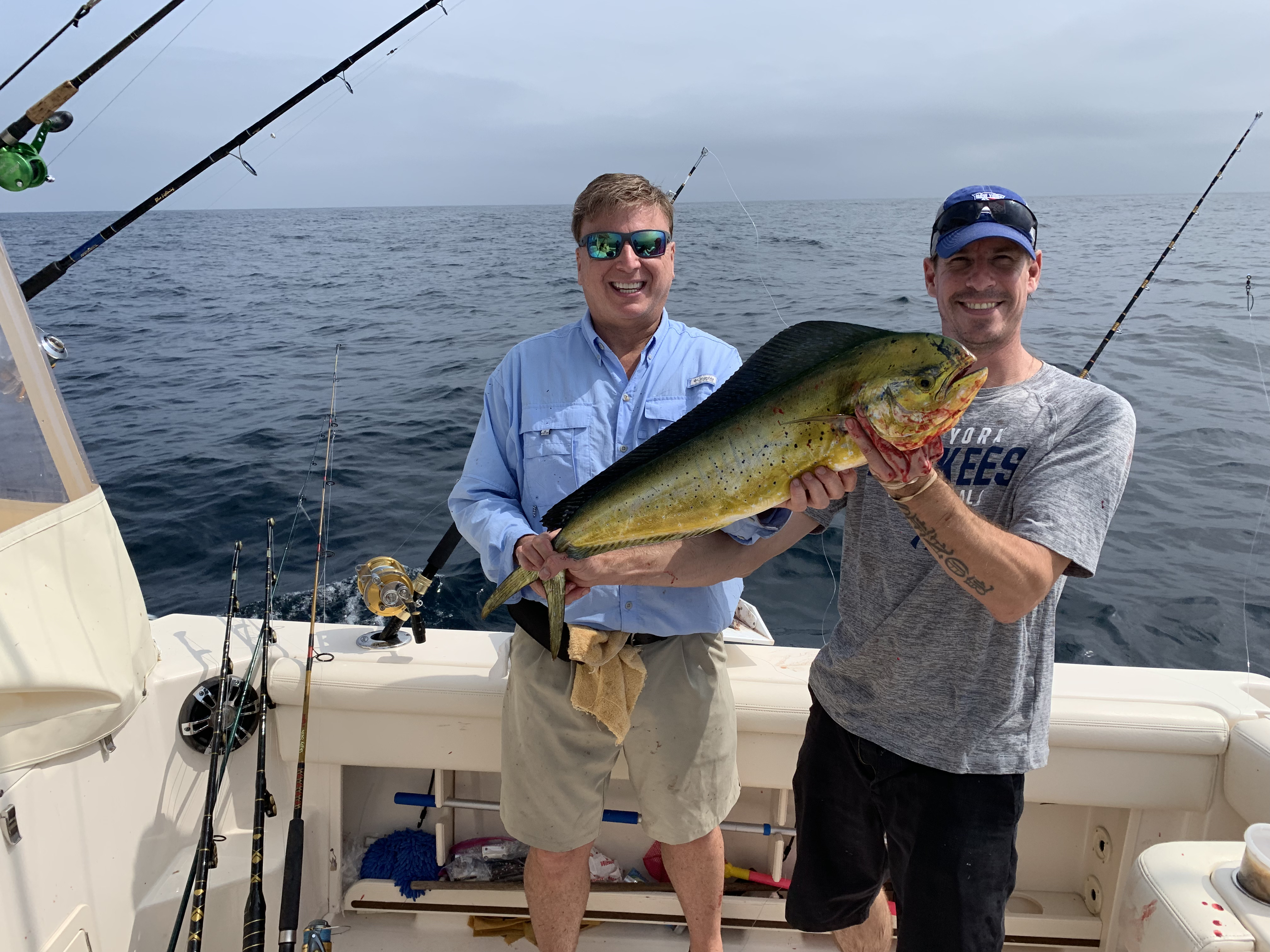 Roger met Steve Phelon on a trip to Aruba where he invited him to come for a visit and fish on his Grady-White boat. This is just one of their successful trips. 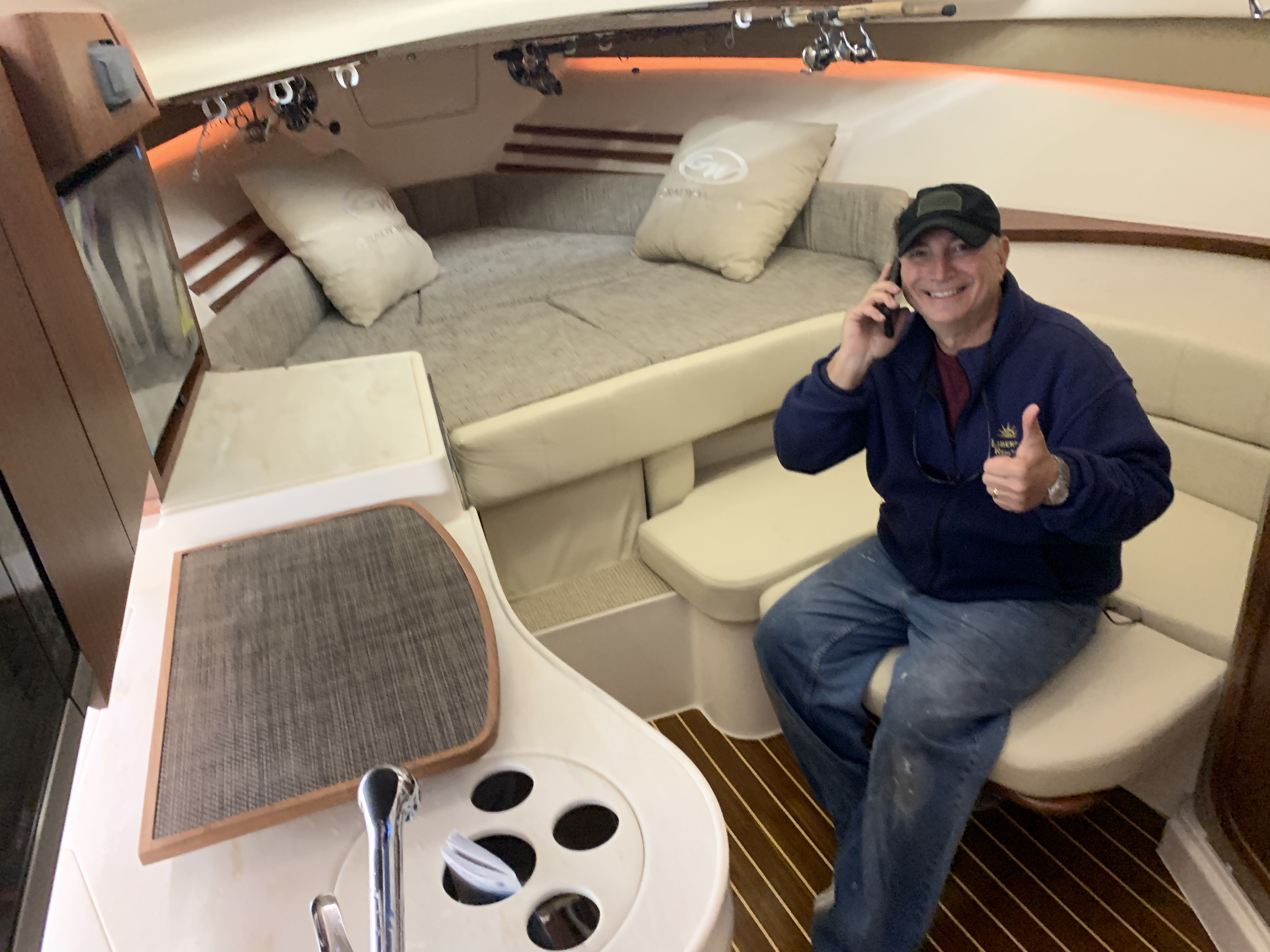 Joe Covello goes below to conduct some business by phone while out fishing. Roger said Joe made him take a photo because the cabin is so beautiful!

Roger met Steve Phelon on a trip to Aruba where he invited him to come for a visit and fish on his Grady-White boat. This is just one of their successful trips.

Joe Covello goes below to conduct some business by phone while out fishing. Roger said Joe made him take a photo because the cabin is so beautiful! 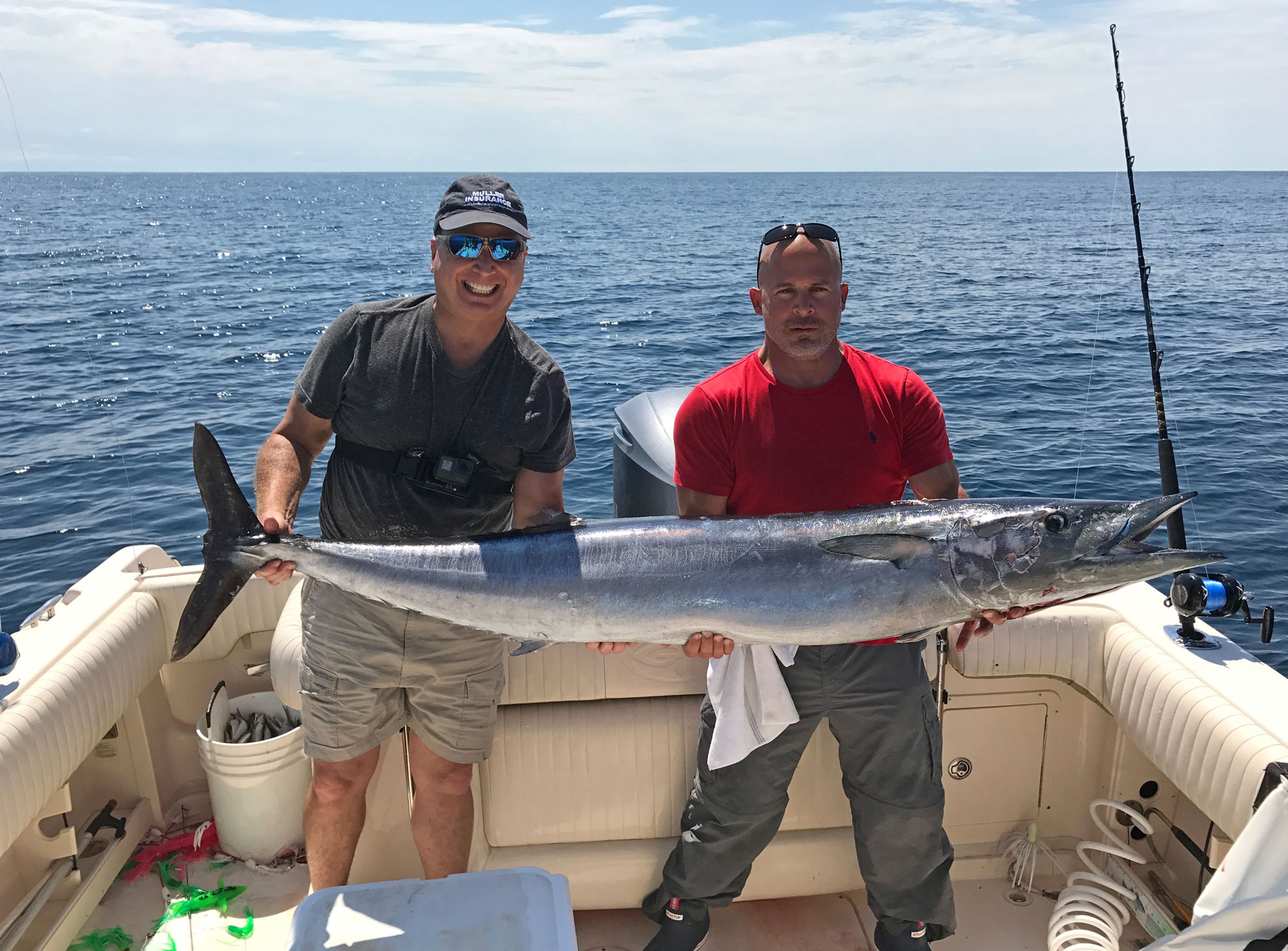 A highlight of Roger’s 2021 fishing season was catching this impressive wahoo with Michael Manno.