Only Grady-White has it all for this large crew

For more than 30 years, Michael Candido and his wife, Joyce, enjoyed boating with friends at their summer home along the New Jersey shore. He especially liked to fish and had many generous friends willing to let him join them on their boats for offshore fishing excursions. After Michael and Joyce’s four daughters graduated from college, got married, and started having children, the couple realized it was time to purchase their own boat. That year, four of Michael’s friends took him to the New York Boat Show where he was able to investigate a variety of boat brands and models. Comparing boats side-by-side, he could easily recognize the superior quality, fit, and finish of the Grady-White boats he saw, and he decided to purchase a Fisherman 236. His primary reason for choosing the center console model was that he planned to fish a lot and cruise just a little with his family.

When delivery time came, the Candidos’ salesman, Ralph Munsie from Comstock Yacht Sales, arranged for a local captain to spend a few hours giving Michael and Joyce a few pointers. Most of the time ended up being used teaching Michael how to dock the boat. That prompted him to hire the captain for several more sessions so he and Joyce could learn even more. “That was some of the best boating money I’ve spent,” exclaimed Michael. “The captain’s training, along with a state-required boating course Joyce and I took together, made us more comfortable at the helm.” In fact, after owning the boat a short time, he took his friends fishing, this time on his boat, and they were all amazed at how skilled he was – noting he handled it like he’d been at it for years.

Joyce and her friends enjoy visiting in the comfortable and roomy bow with the Easy-up bow shade deployed. They also like the convenience the bow table provides for holding beverages and more.

Michael and his granddaughter, Sonia, relax after they arrive at their destination.

Joyce and her friends enjoy visiting in the comfortable and roomy bow with the Easy-up bow shade deployed. They also like the convenience the bow table provides for holding beverages and more.

Michael and his granddaughter, Sonia, relax after they arrive at their destination.

Soon Michael found out that as much as he liked to fish, he actually spent more time on the boat with family than he did at the fishing grounds. His four children, their husbands, and six grandchildren (with two more on the way) love being on the boat. Their favorite way to spend the day on the water is to go tubing, then anchor up so the kids can jump off the boat, swim, and have a picnic lunch. In addition to having fun family time, Michael and Joyce like to meet friends and raft up for lunch, or dock and dine.

One day, as Michael was docking the 236 at the Bay Head Yacht Club, the person in the slip next to him asked if he would be willing to help with race patrol at Sunday’s sailboat race. Michael agreed, and the sailboat owner invited him to come to the sailing committee barbeque – which was just about to start. When he got there, his new friend marched up to a table and introduced Michael as the newest member of the race committee, which supported the races every Sunday during the summer. Now in his third year, Michael said he really enjoys it and has learned a lot about sailing. When asked what his job entails, he said he and a small crew drop the start and finish line markers and then watch to be sure no boats get into trouble. “No one has ever had a problem and it’s a nice way to spend Sunday afternoon on the boat,” Michael notes.

After completing the New Jersey boating course and joining Michael for several sessions with a boat captain, Joyce is more comfortable at the helm.

After three years with the 236, fishing less than expected, Michael was at the dock and saw Ralph, his Grady-White salesman, and asked, “What’s this boat worth today?” Fully expecting it to be similar to the way a car depreciates, he was shocked when Ralph’s response was close to the price he’d originally paid. With the family growing, and the realization that he was using the boat a lot more for recreation than fishing, Michael and Joyce decided to sell the boat and replace it with a Grady-White Freedom 285, a dual console. In their opinion, the dual console setup, along with a bigger head compartment and a built-in refrigerator, makes the boat more family-friendly, but still affords Michael the ability to fish with his friends and sons-in-law offshore. Other benefits of the 285 include the shade they get from the full-width hardtop, the SureShade® that covers the cockpit, and the Easy-up bow shade. In addition to the size and layout change, Michael says that the new capabilities of the electronics and the Helm Master EX® with Full Maneuverability are two other outstanding features of the new boat.

The 285 is the perfect boat for the Candido family’s lifestyle. The layout is just right for days of tubing, swimming, and having a picnic with the grandchildren. He’s even gotten in a few fishing trips with his sons-in-law and friends. Michael notes that he’s grateful Joyce enjoys the boat as much as he does, and that his children and grandchildren have taken an interest as well, affording them more quality time together. Let’s not forget those Sunday afternoon sailboat races. If you’re anywhere near Barnegat Bay, New Jersey, on a summer Sunday afternoon, cruise by and see this beautiful Grady-White and its crew enjoying the race! 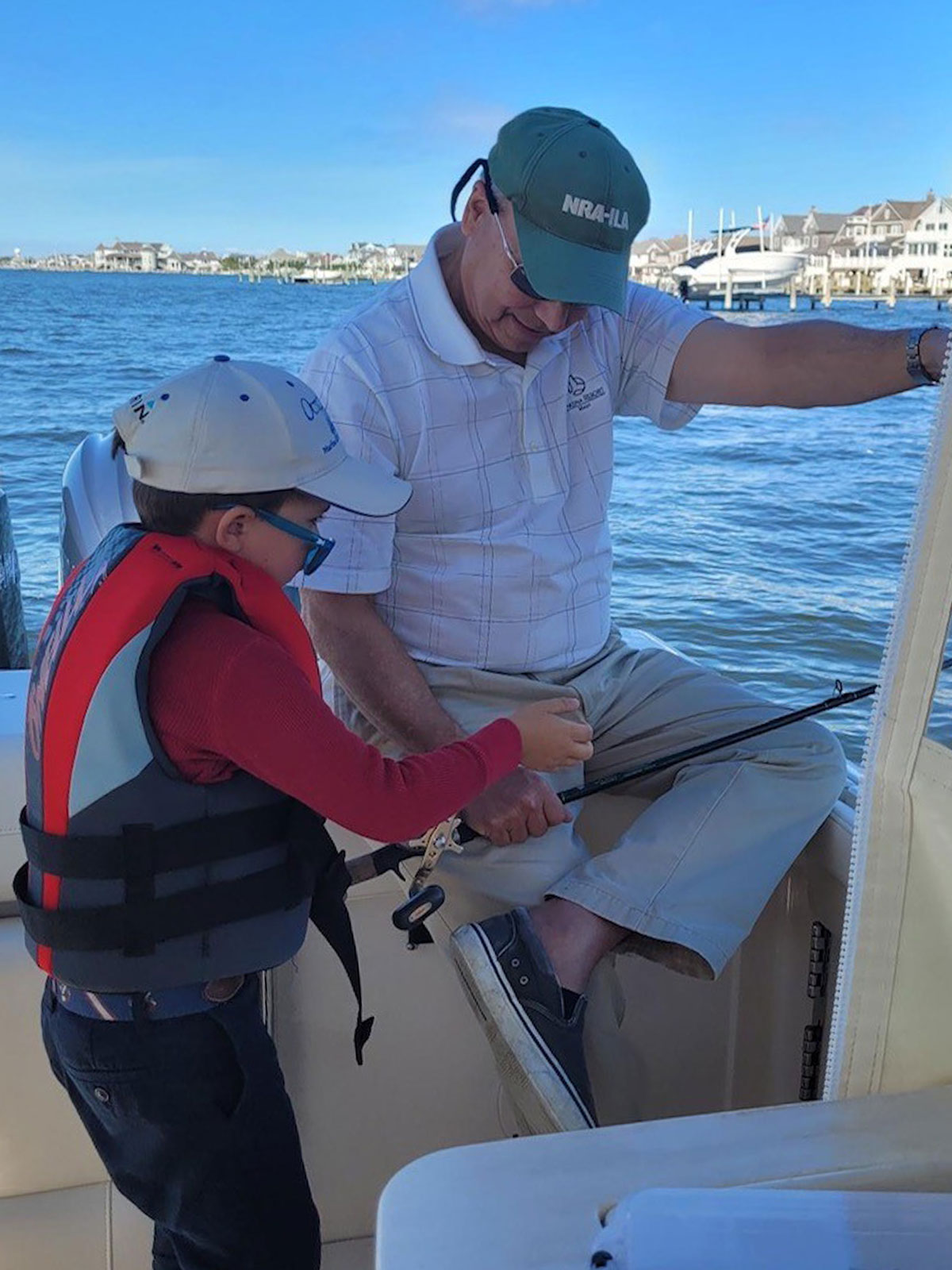 The Candidos’ 5-year-old grandson, Charles, is excited to learn how to fish – just one more reason that Michael loves owning the Grady!

Sonia takes the wheel (well, kind of) in what Michael refers to as Boat Captaining 101.

The Candidos’ 5-year-old grandson, Charles, is excited to learn how to fish – just one more reason that Michael loves owning the Grady!

Sonia takes the wheel (well, kind of) in what Michael refers to as Boat Captaining 101.