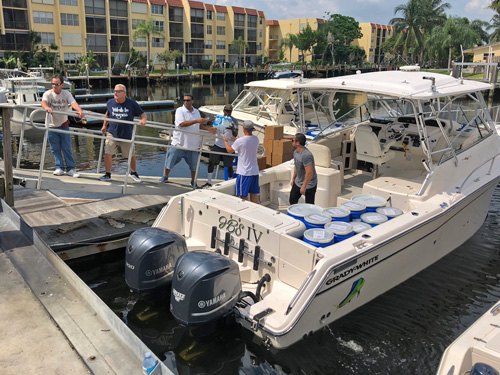 We’re all aware of the crushing blow Hurricane Dorian delivered to the Bahama Islands. (pictured: Floridian Grady Club members organized a team of volunteers to deliver supplies to the Bahama Islands in the wake of Hurricane Dorian.) A frequent destination for several Grady Clubs, these islands have forged friendships among Grady owners and native Bahamians. In an effort to assist their friends, several Grady Clubs have been delivering much needed supplies and helping with rebuilding efforts.

As Hurricane Dorian struck the Abaco Islands many Floridian Grady Club members watched with concern knowing their Bahamian friends and their little slice of paradise would never be the same. For more than 30 years, Grady Clubs from Florida have traversed by boat to the Bahama Islands. Brian Cunningham, of Vero Marine Center said, “The Vero Beach Grady-White Club, known as The Grady Bunch, was the very first Grady-White owners club to form, and our first big signature trip was to the Bahamas.” After Dorian passed the Bahamas, Brian sent an email asking for donations. By the end of the week they took a truck full of supplies to the Stuart, Florida airport where Operation 300 put it on a plane and took it to the Bahamas.

At the same time, Bill Mahoney of the Gulfstream Grady Group in the West Palm area was working with fellow club members to start their own Relief. The group of 64 members met, pinpointed people that they could contact in the Bahamas to help them identify the greatest needs and started a fundraiser to purchase the needed items. As the needs shift from food, water and clothing to medical and building supplies, the group recently provided some of the cash needed to purchase heavy equipment and lumber that will be used to aid in the clean-up and the rebuilding process.

John Charos of the South Florida Grady Group and Jon Burkert of Pompano Beach Marine Center took four Grady-White boats filled with supplies to West End. “That first trip there was a lot of chaos. It was reassuring to be able to give the items to people we knew and could count on to get it to those with the greatest need,” noted John. Since then Jon has secured the necessary government approval letters to continue their efforts to take supplies over by boat. 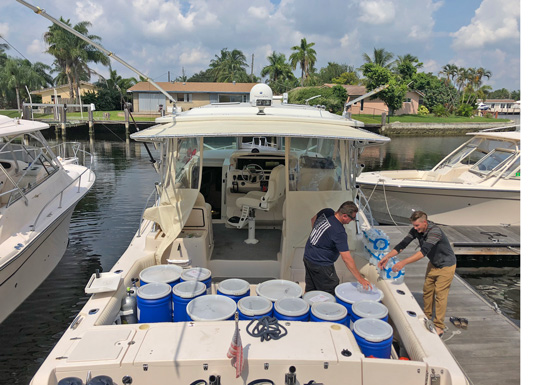 All having Grady-White boats, and residing along the east coast of Florida, these clubs quickly discovered they were working towards the same goal and began to share information. Ironically, both the Gulfstream Grady Group and The Grady Bunch were working with Operation 300 to fly supplies over. Bill Mahoney says, “Working together we have been able to share ideas and help each other in ways that allow us to make the most impact.”

Fellow Grady-White owner, Jamie Wakem, owner of Atlantic Filter Corporation, is helping tackle the unique issues associated with the failure of the islands’ desalination systems. “We hope to soon start shipping some small reverse osmosis systems capable of producing 10,000 gallons of water a day, notes Jamie. These can be placed in strategic locations throughout the islands where people can come and fill bottles, thus reducing the amount of plastic waste.

Brian Cunningham says, “I’ve always loved a Bahamian saying–‘We work from can to can’t.’” And that seems to be not only what the people from the Bahamas are doing but also the Grady clubs working to help the people and islands they have come to love.

Unfortunately, Dorian unleashed more wrath up the East Coast. Dorian made another land fall again—this time on the North Carolina Outer Banks, leaving in its wake devastating tornado damage in Emerald Isle and the worst flooding ever recorded on Ocracoke Island.  Dorian then continued North taking its final aim on Nova Scotia and Newfoundland before finally dissipating. Our hearts and help also extends to Ocracoke and Emerald Isle through the American Red Cross and the Outer Banks Community Foundation, worth considering if you are planning your own donations.