Explore the Coast with Tips From this Experienced Grady Traveler

As a surgeon and boating fanatic, Wayne Poll views every day as a school day where he challenges himself and his skills. He loves to learn and experience new things, and spending the day in nature is one of the top reasons he enjoys traveling by boat. “Arriving at a new place by water is such a different experience,” Wayne says. “You also get to be outside all day, and you don’t get caught in traffic jams.” That was particularly so for the past year as he and his girlfriend, Leslie Fox, traveled by boat along the coast of South Carolina, Georgia, and Florida. The journey began last September when they trailered the boat from Columbus, Ohio, to Charleston, South Carolina. Once there, they broke the trip up into five segments, traveling back home to Ohio in between each.

Traveling long distances by boat is not new for Wayne. In 2018, he and his daughter, Amanda, embarked on a boating journey from Miami, Florida, to Charleston, South Carolina. This time Leslie, a novice boater, joined Wayne on his travels. After boating with Wayne on and off over the past eight months, she’s not only honed her skills but also discovered she loves boating! On this trip, Wayne took Leslie to some of the same wonderful places he and Amanda discovered four years ago.

The first leg of the journey took them from Charleston, South Carolina, to Jekyll Island, Georgia, stopping in Beaufort, South Carolina, and Savannah, Georgia, along the way. That first day they ran through rain the entire time, but with the curtains up they stayed perfectly dry, Wayne reports. “If the first day had been stormy, though, we would have waited and left a day later,” Wayne noted. When planning a trip, he always allows extra time in case they need a lay day due to bad weather. That’s just one of the suggestions he gives to boaters planning a trip like this. As a result, sometimes they would arrive at their final destination a day early, which just gave them more time to explore the local flavor of the town—a highlight for Wayne!

At the end of each leg of the trip Wayne put the boat into storage until they returned. This gave him a chance to thoroughly clean and check the boat regularly. After their arrival in Georgia, they returned home for a few months before heading south again in November for the Jekyll Island to St. Augustine, Florida, segment of the trip. While their last journey had offered sights of historic towns, this trip treated them to wild horses running on the beach at Cumberland Island Nature Preserve and ballistic submarine sightings at the Kings Bay Naval Base. A month later they returned to St. Augustine to take the boat all the way to Stuart, Florida. With each day of progress, Wayne and Leslie moved closer to the most challenging leg of the trip – traveling outside of the Intracoastal Waterway and into the open ocean.

Since the boat does not have a cabin for them to sleep overnight, Wayne and Leslie stayed at hotels along the way. Planning a good portion of the trip outside of peak vacation times made finding places to dock and stay overnight easier and offered more flexibility if they needed to rearrange a travel day. Another great suggestion from Wayne was to try to time each day’s travel to be no more than five to six hours. “The best time to travel is from 9:00 am – 3:00 pm,” Wayne explains. “This gets you in before any afternoon storms.” He also noted that by following this schedule it allowed them to get to the hotel early, take a shower, and enjoy a nice dinner before getting a good night’s sleep. “Then we were raring to go the next morning!” says Wayne.

Leaving Stuart, Florida, and heading to Miami in February gave Wayne and Leslie the opportunity to visit the Grady-White booth at the Miami International Boat Show. “It was so nice to visit with the people from Grady-White and get on the new boats on display,” notes Wayne, who might soon be in the market for a slightly bigger model. While he thinks about getting a bigger boat, he continues to sing the praises of the 235, which he loves. One benefit of the 235 is that the boat is easy to trailer from place to place, so he can experience a variety of new destinations. It’s also capable of going long distances, some offshore, including a 109-mile trip from Key West to Naples. Wayne further boasts how great the 235 takes sea conditions and planes out at moderate speed, even when it’s rough. Not to mention how happy he is with its comfort and design. He also is very proud of owning his Grady, and how people recognize its quality. “Everywhere we went people came up to tell us how much they loved our boat,” says Wayne.

It was June before they returned to Miami for the final leg. Wayne noted that June was the safest time to do the big water travel and he purposely timed it for then. To prepare for the open water travel, Wayne made sure he had all the proper equipment before leaving Ohio. “I believe in redundancy when it comes to safety,” notes Wayne. “I have the 12” Garmin® but I also carry a waterproof iPad as backup. I have a radio, backup radio, and satellite phone. The only thing I missed was a radar, which would have enabled me to better see storms as they popped up.” Fortunately for Wayne and Leslie, they didn’t experience any bad storms because they remained flexible and timed their travel when the weather was at its best.

The Key West dockmaster, who had made the trip over 100 times, suggested a weather app that would help Wayne determine the best day for travel. True to its forecast, they skimmed across the ocean on a flat sea.

We imagine this won’t be Wayne’s last journey by boat, especially now that he has new boating partner, Leslie, aboard. He hopes their experiences will spark other Grady owners’ interest in exploring new waters a little farther away from home. Whether you want to visit quaint towns, experience nature on an uninhabited island, or fish along a new shore, take Wayne’s advice and you’re sure to have as much fun as he and Leslie did. So what are you waiting for? Grab your Grady and go make new memories on the water and in exciting new places! The Grady Life and life-long learning go hand in hand. 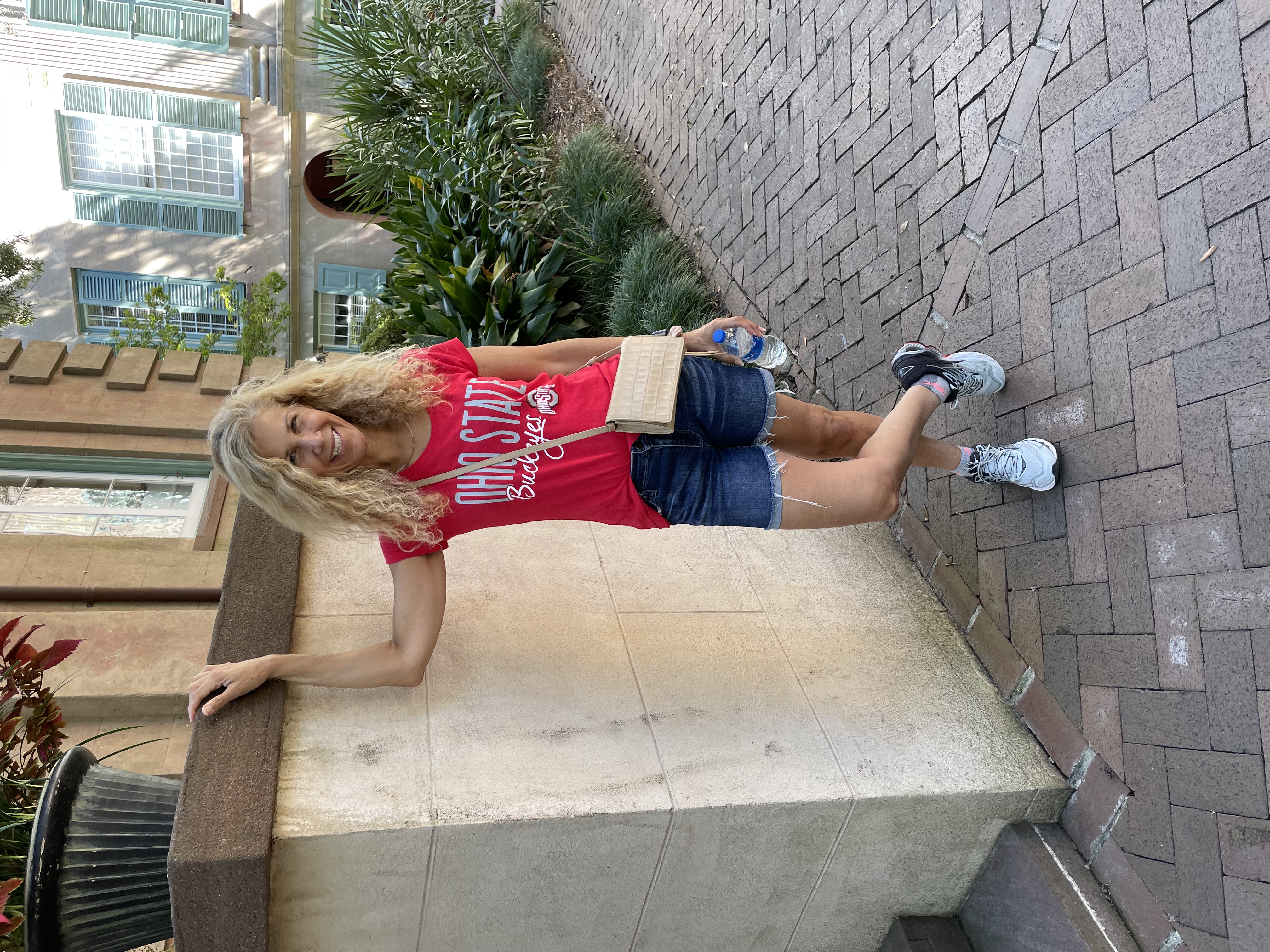 Leslie posed in front of a home in the historic district of Charleston, South Carolina, before they began their trip. 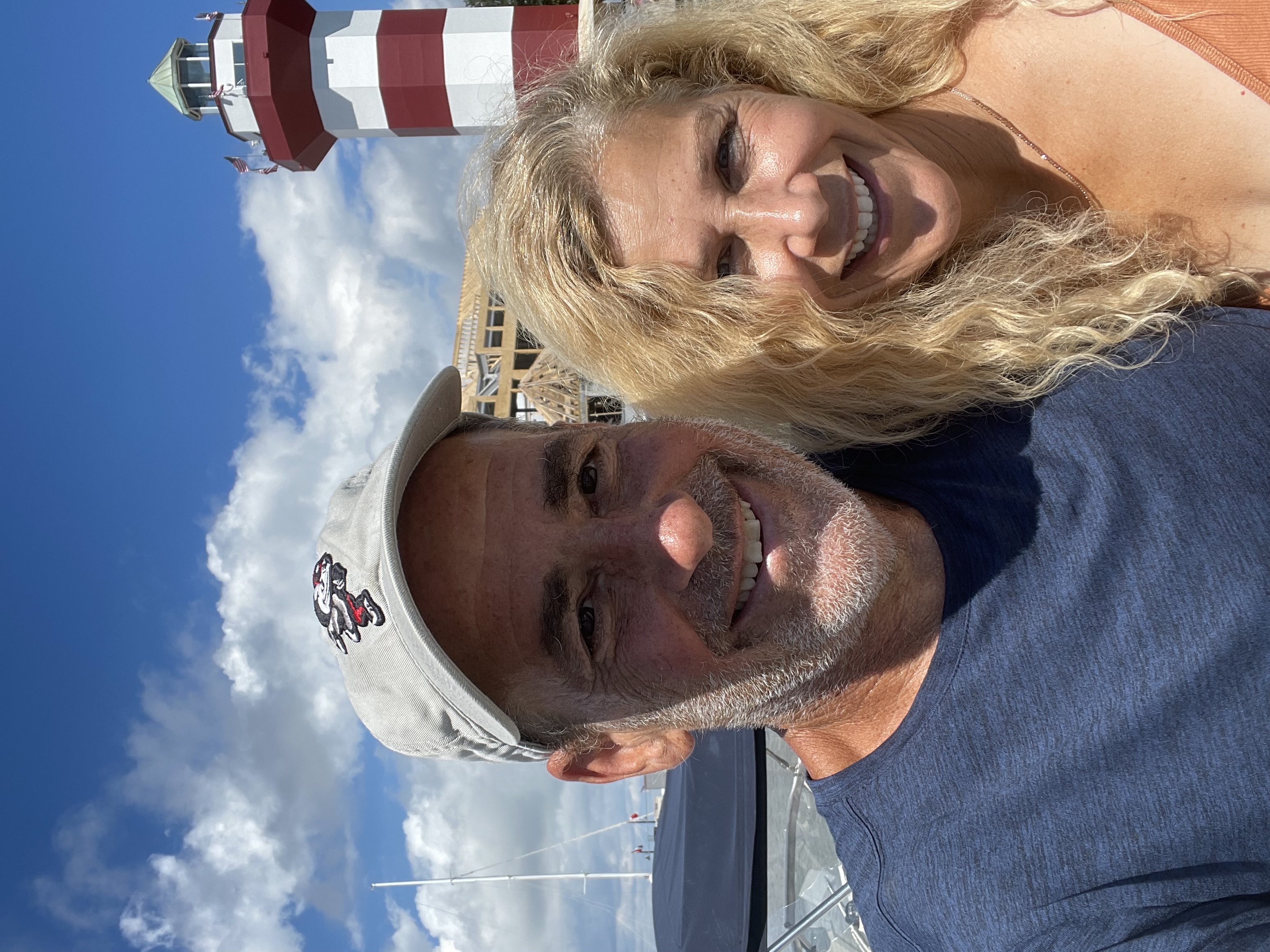 Wayne and Leslie snapped a quick photo with the Hilton Head Island, South Carolina, lighthouse as their backdrop.

Leslie posed in front of a home in the historic district of Charleston, South Carolina, before they began their trip.

Wayne and Leslie snapped a quick photo with the Hilton Head Island, South Carolina, lighthouse as their backdrop. 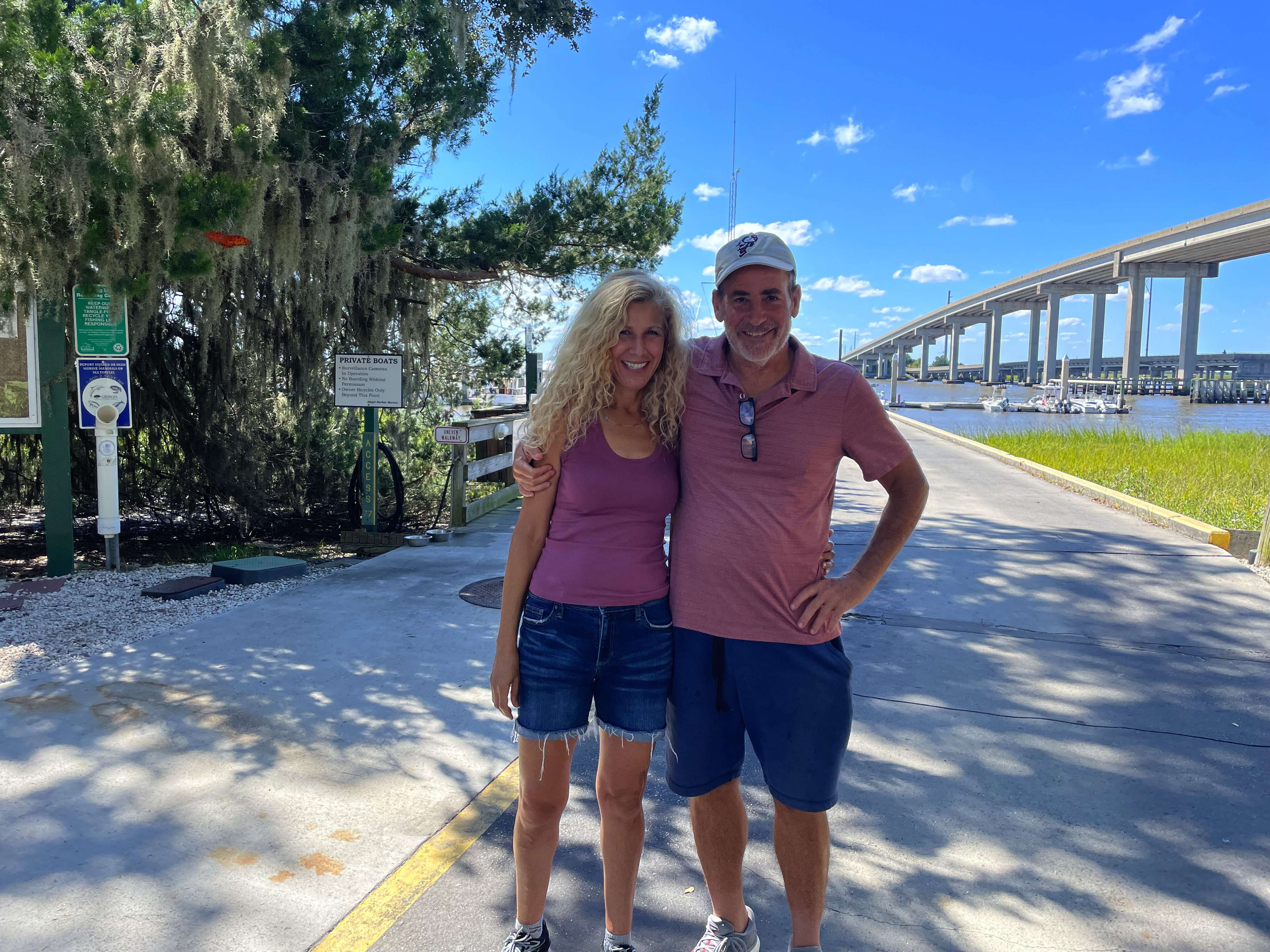 When they arrived at Jekyll Island, Georgia, they had completed the first leg of the trip. It was time to head home, but not before getting this shot with the Jekyll Island bridge behind them. 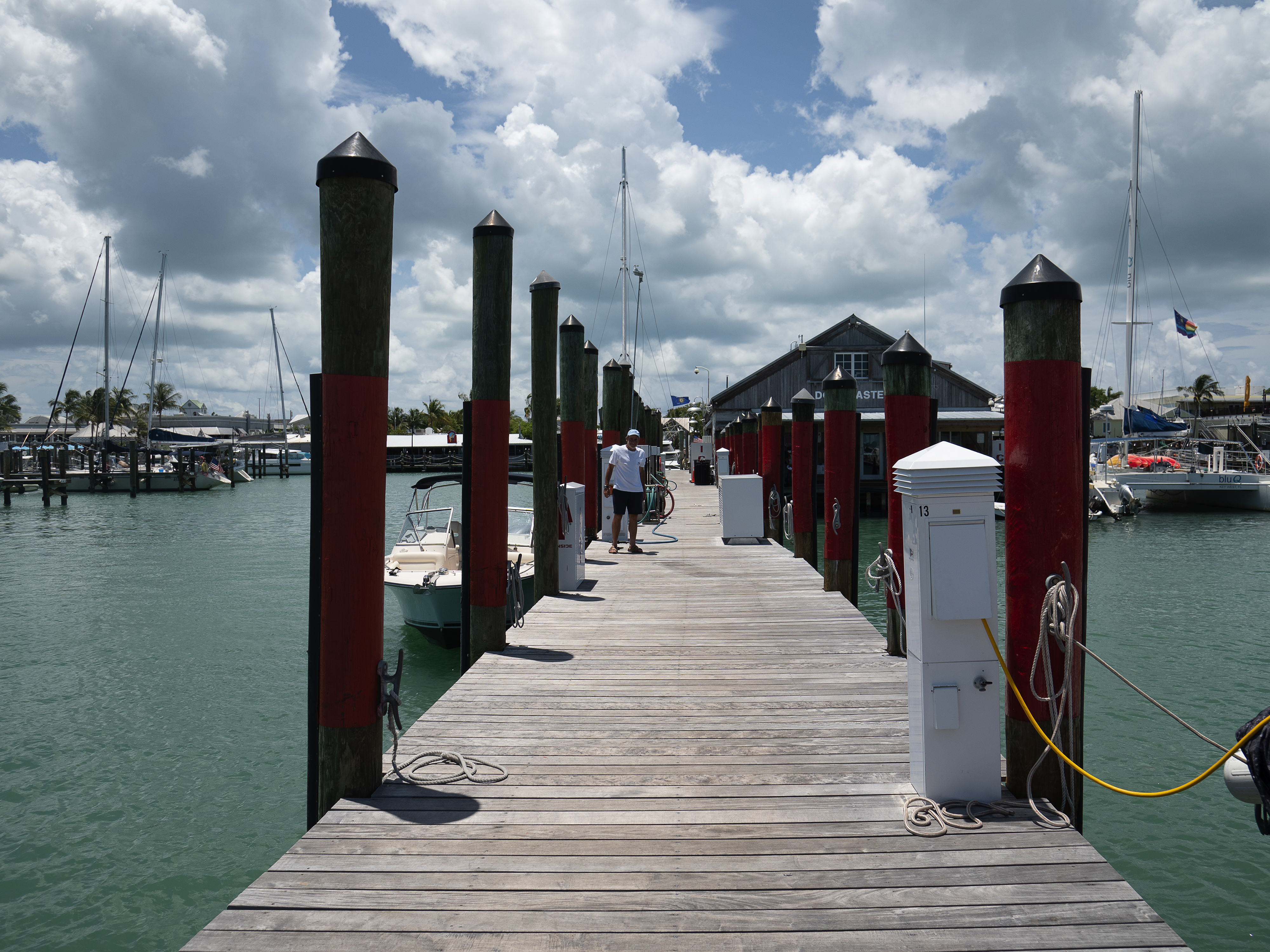 Wayne filled the boat up at the Key West Harbor dock in preparation for their trek across the Gulf Coast waters to Naples, Florida.

When they arrived at Jekyll Island, Georgia, they had completed the first leg of the trip. It was time to head home, but not before getting this shot with the Jekyll Island bridge behind them.

Wayne filled the boat up at the Key West Harbor dock in preparation for their trek across the Gulf Coast waters to Naples, Florida.

One of the most memorable stops for Wayne and Leslie was a visit to Cumberland Island Nature Preserve off Jekyll Island, Georgia. There they saw the wild Cumberland horses and explored the island which is mostly uninhabited except for the ten room Greyfield Inn. 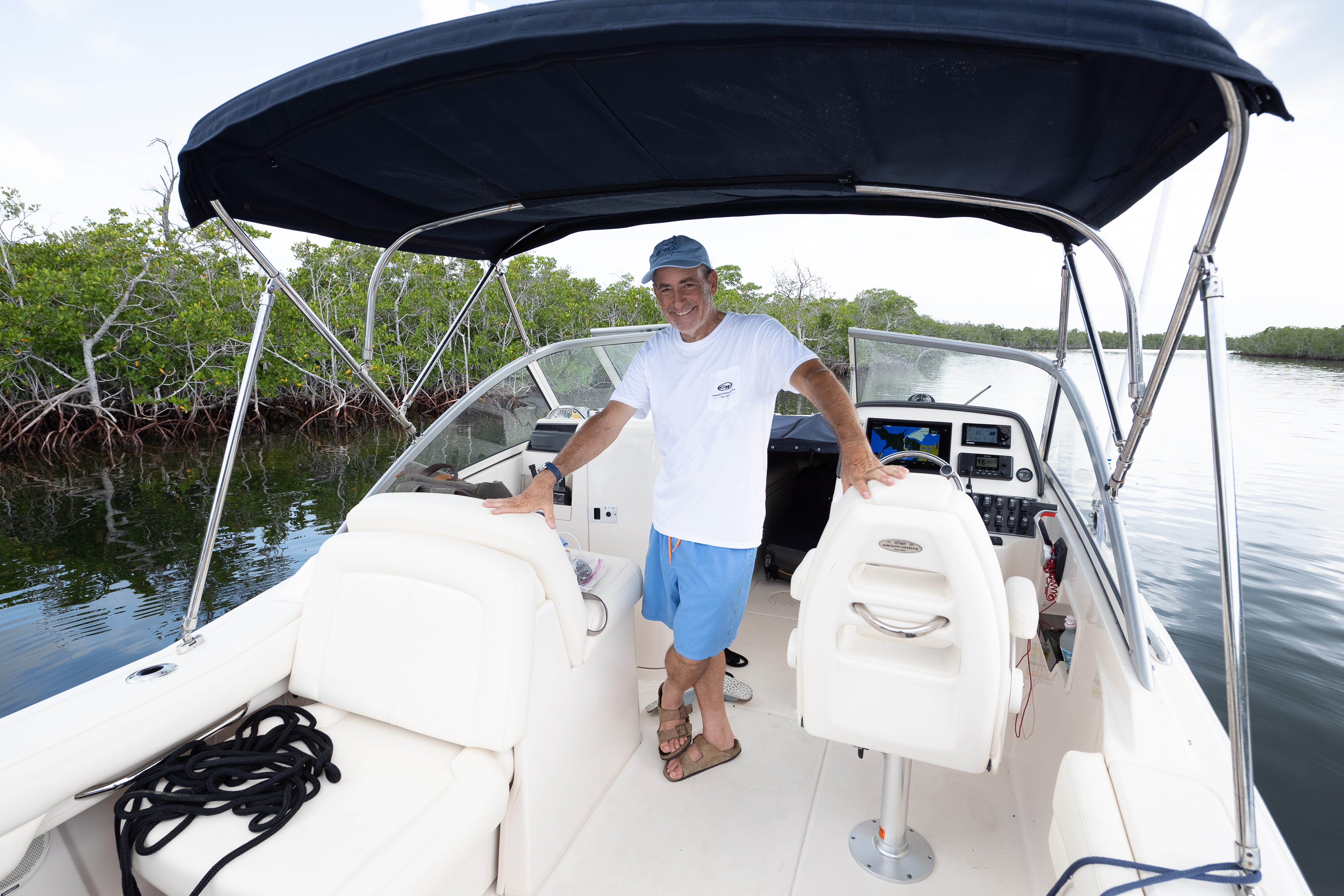 Traveling through the Mangrove Swamp near Key Largo, Florida, was a new experience for Wayne and Leslie. 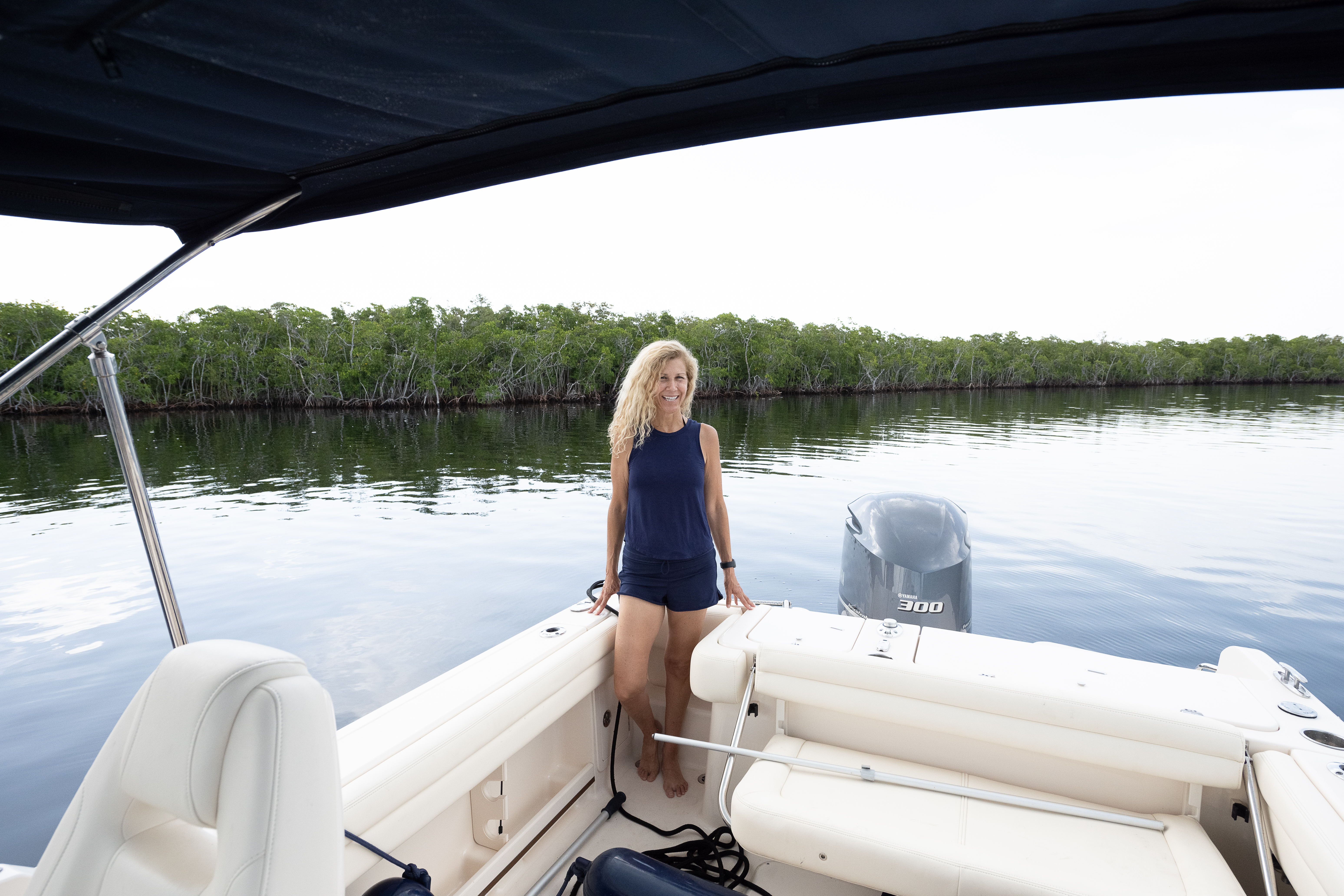 Traveling through the Mangrove Swamp near Key Largo, Florida, was a new experience for Wayne and Leslie.

Thanks to a weather app suggested by the Key West dockmaster, Wayne and Leslie enjoyed perfect sea conditions for their trip through the open waters of the Gulf of Mexico to their final destination in Naples.