Pirate Families Take to the High Seas of the Northeast

To further a feeling of community among their Grady-White boat owners, Port of Egypt Marine in Southold, NY, encouraged the gathering of a crew that calls themselves the "Port of Egypt Pirates." In their travels to new ports of call, the participating families have found a new connection with their children as well as fun new friendships.

What began as a short excursion from the Port of Egypt marina to watch Shelter Island fireworks on a Fourth of July has quickly grown over two years into a real camaraderie among a dozen Grady-White families as they cruised to places including Montauk and Coecles Harbor, NY, Essex, CT, and Newport and Block Island, RI. "On the first day of our first extended trip, we were strangers," explained Donna Lieblein, Port of Egypt Pirates co-captain and wife of POE General Manager Will Lieblein. "On the second day we were friends. On the third day we were family, and by the fourth day we were Pirates and didn't want to go home." 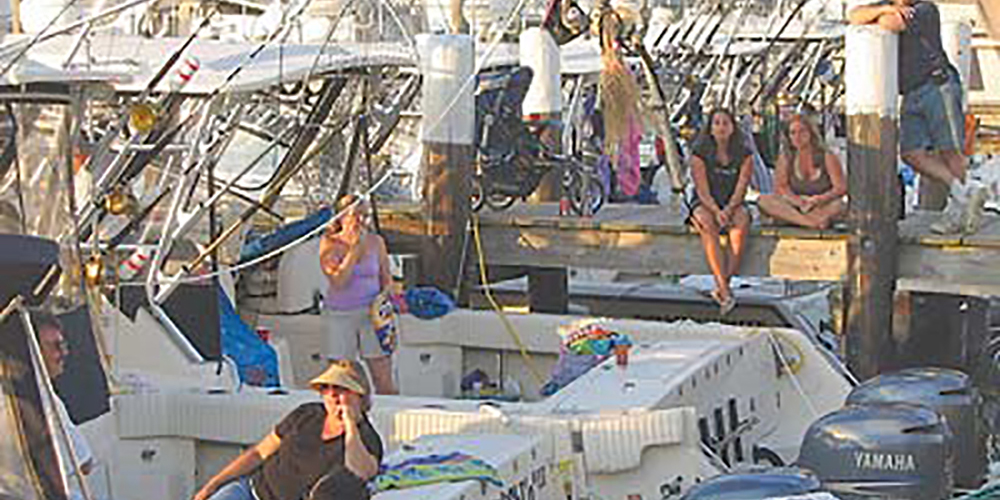 WITH THEIR MASCOT SWINGING FROM AN OUTRIGGER, a few Port of Egypt Pirates relax during their Summer 2005 Block Island, RI, cruise.

WITH THEIR MASCOT SWINGING FROM AN OUTRIGGER, a few Port of Egypt Pirates relax during their Summer 2005 Block Island, RI, cruise.

Gulfstream 232 owners Tom and Ann Marie Rondi from Smithtown, NY, especially enjoy how their teenage children Michelle and Brian-who were not necessarily thrilled with leaving friends at home to hang out with their parents-have made other friendships that have gone beyond the docks. Although the young Pirates don't all live near each other they continue to go out of the way to visit often. "It's a great way to show our children that life and friendships are bigger than the several blocks around our home," Tom said.

DANCIN' THE HEMPEN JIG - non-stop fun was the rule on the Port of Egypt Pirates trip to Shelter Island.
Macro alias: RTEEmbeddedImage

Self-assurance on the water is a fringe benefit of being a Pirate. "We've gained a lot of confidence on these trips," noted Ginny Sommers of Shirley, NY, who with husband Frank and their children Jackie, Frankie and Ryan enjoy their Marlin 300. "Our idea of adventure was taking the boat out, fishing, and then going back to the dock. Heading out into the Intracoastal or ocean was a little intimidating. With the support of the others, it became an exciting Pirate adventure."

"When we docked at Star Island in Montauk, people told us that they had never seen such a large group from one marina enjoy each other's company on a road trip," continued Ginny. "Every night was a party. And the fun didn't stop. We keep in touch, and invite each other to our own parties."

The feeling at the marina is a club-like atmosphere where everyone feels welcome," said Express 330 owner Bill Brayer. "Every event has been memorable. The Pirates idea has really taken off, and Tom Rondi developed a logo." Bill, his wife Diane, and sons John, Kevin and Billy are from Wading River, NY. The logo has spurred a t-shirt design contest.