Four thousand road miles across the USA and Canada—each way. Six weeks of exploring the natural and historic wonders of the Inside Passage and Interior. A Florida couple makes a fourth trek in their third Grady-White seeking amazing wildlife and always-new experiences in Alaska.

Last June 7, Bill and Nancy Shaddix trailered their 2003 Islander 270, Thank You Lord, from Ormond Beach, FL, through the heart of the USA and across Alberta and British Columbia, Canada, to put in June 15 at Prince Rupert on the Chatham Sound. They were accompanied by two other trailered boats and crew, with more friends and family flying out to join parts of the journey.

"Bill has always been adventurous," said Nancy. "His initials are W.O. but I say they should be G.O.!" In fact, Bill had thought about homesteading in Alaska when he was in his twenties. "Alaska is the last frontier," he said. "This is a great opportunity for experiences you can't get elsewhere. I wanted to share it with my children."

This was their fourth Alaska expedition: 1989 was in a 22' Grady-White, and the family had a Gulfstream 232 in 1991 and 1993. On this year's trip, they came across a wider variety of wildlife than ever, and added a week's air-land travel from Juneau to Anchorage, coaching to Denali National Park and Mount McKinley. The beauty of trailer boat travel is having a wider selection of options when you travel. "You can choose prime times and places for when you want to be on land, and when on the water," explained Nancy. "Our country is just beautiful to experience driving through." She added that books on tape are good for long road miles.

ANCHORED NEAR SULLIVAN'S ISLAND on the Lynn Canal

ANCHORED NEAR SULLIVAN'S ISLAND on the Lynn Canal

Their Grady-White was recognized many times along the way. "Where are you going to put in?" asked people in the grasslands. "Let us know when you want to sell," said someone when the Shaddix crew put in at Prince Rupert. And in Elfin Cove, near Glacier National Park, a man from the top deck of a 130-passenger Yorktown clipper called out, "I have two Gradys back in New York!"

The 57-square-foot cockpit of Thank You Lord is transformed into a great room ("our Blue Room") with custom canvas that seems like a hardtop but folds as a Bimini does. Overhead lighting includes night visibility lamps. Nancy's sister, Melinda Crosby, flew in to Ketchikan to join them, and her Blue Room berth was made atop custom fiberglass chests, cushion padded for comfort, that also served as food and dry storage. The cabin vee berth was adapted with additional two-inch foam covered with a removable polar fleece cover and jersey knit sheets. Polar fleece blankets and a synthetic filled vee berth sleeping bag provided protective covering. The galley area of the 270 cabin was revised to allow more storage for clothing and towels. Food preparation and meals took place on deck. Drink holders served as flower vases, where red flowers arranged for Melinda's welcome attracted a brave hummingbird. 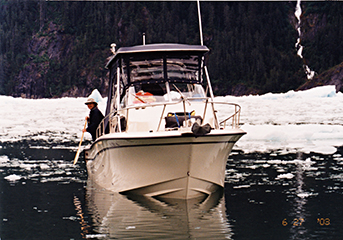 CAREFULLY NAVIGATING THE "BERGIES" NEAR THE LE CONTE GLACIER. Note the inflatable dinghy packed at the bow.
Macro alias: RTEEmbeddedImage

The views? "It's like going on a special Easter egg hunt," described Nancy. The group noted Steller sea lions near Easterly Island; good whale watching in Frederick Sound and Icy Strait; puffins near Three Hill Island; and they saw a grizzly swim a half mile from island to island near the Tracy Arm glacier area. They harvested ice from the "bergies" calving off glaciers. Memorable land excursions included a vintage train ride from Skagway to Lake Bennett where boats were built to service the gold mining area; a Native American Chilkat dance performance in Haines; a hot soak at Baranoff Hot Springs; and the beauty of Denali, where a park ranger recounted the history of dog sledding.

The group took out of the water on August 2. The 270 had traveled approximately 1,950 nautical miles on 965 gallons of fuel with twin Yamaha 225 four-stroke engines. The couple arrived back home in Florida on August 9.

And next year? "I think we'll put in at Seattle or Vancouver," said Bill. "We won't go all the way to Skagway, maybe down around Prince Wales Island." There is always a grand adventure to be had with a Grady!

MANY MUNICIPAL MARINAS DO NOT TAKE RESERVATIONS. We arrived a day early in Auke Bay, near Juneau, prior to the Denali leg of our trip, to make sure we had a spot. Ten-day maximum limit.

OFTEN YOU WILL FIND STATE FLOATS OR BUOYS (listed in Marine Atlas, Charlie's Charts). In protected areas, these were originally placed for commercial boat use in severe weather.

TIDAL CHANGES RUN FROM 12-20 FEET, so take into account when anchoring! We usually anchored in 30-40 feet minimum, using a 22-lb. Delta anchor and always carry extra line. Most marinas have floating docks.