<b><span>When Russ Otterbine and Chris Branch of Pinellas County, FL, went to the 2006 Fort Lauderdale Boat Show, they fell in love with Grady-White's <em>Express 330</em>. Russ and Chris had boated extensively around Florida, the Bahamas and the Great Lakes, but they'd always wanted to travel "America's Great Loop." The <em>330</em> looked like the boat that would help fulfill this dream. The two actually had begun the circuit from Michigan four years prior in a 42-foot Tiara, but were driven back by hurricanes. Here's the story of their Grady-White adventure that took them over 4,300 miles.</span></b><br /><br />
<p>"America's Great Loop" is accomplished by "Loopers" who cruise or sail the continuous waterways of the eastern portion of North America along the Atlantic Seaboard, through the inland rivers, across the Great Lakes, via more rivers and then around the Gulf of Mexico. This trip was one we had wanted to do for some time, and in fact had begun a portion of in our former boat, <em>End of the Line</em>, before Hurricanes Charlie, Frances, Ivan and Jeanne interfered with our plans.</p>
<p>After seeing the <em>Express 330 </em>at a Fort Lauderdale boat show, and meeting Grady-White factory sales representative Eddie Rowe, we were connected with Quality Boats in Clearwater, FL. "This is the boat we want to do the 'Loop' in," we told Quality's Dan and Dave Bair. The shallow draft would get us through all passageways, we could trailer the boat, the cabin berth layout was great for sleeping, and the storage capability meant we'd never run out of room and we weren't cramped. We loved the twin Yamaha outboards for efficiency and ease of use!</p>
<p>The show model was available and was commercially trailered to Washington, NC. We previously had cruised from Tarpon Springs, FL, to the Albemarle Sound, so decided to pick up our Loop journey from Washington. Being just 30 miles from the Grady-White factory in Greenville, we enjoyed a tour of the factory while we were in the neighborhood.</p>
<p>We left Washington aboard <em>End of the Line 2</em> on April 23, 2007, and followed the Intracoastal Waterway to Norfolk and then cruised up the Chesapeake Bay, visiting St. Michaels and Annapolis, MD, along the way. After Cape May, NJ, we went via the Atlantic Ocean until entering New York Harbor. After a couple of days visiting our granddaughter in New York City, we continued up the Hudson to the Erie Canal. Due to high water in the Erie, not all of the locks were open, so we left the boat in Brewerton, NY, for two months and followed other travel plans before resuming the Loop.</p>
<p>We picked up "the trail" again July 9 and left the Erie Canal, then entered the Oswego Canal and crossed Lake Ontario to Trenton, Ontario, and began the 240-mile trip through the Trent-Severn Waterway. Every stop along this stretch was fascinating. Most towns, such as Peterborough, had concerts in the park and fireworks on Wednesdays and Saturdays all summer. We could enjoy these right from the marina!</p> 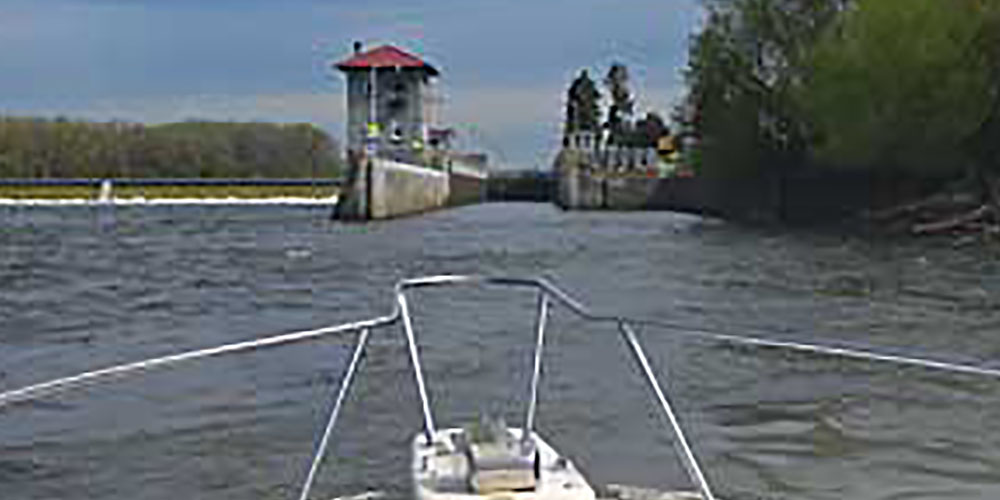 <p>Peterborough is one of the two hydraulic lift locks along this waterway, most others being hand operated. The two locks are unique to North America and among the highest in the world, and were commemorating 100 years in service.</p>
<p>This waterway exits into Georgian Bay, that connects to the North Channel. After 300 miles cruising these two bodies of water, American Customs was cleared on Drummond Island, MI. Drummond Island was still six hours from our summer home on Lake Charlevoix. We crossed Lake Huron, the Straits of Mackinaw and Lake Michigan before entering Lake Charlevoix and our slip in Boyne City, MI. Just fifty miles from home, in crotchety Lake Michigan, the waves quartered at 6 to 9 feet. This was quite a ride, but our 330 handled like a champ. Actually, this turned out to be the only rough water of the entire trip.</p> 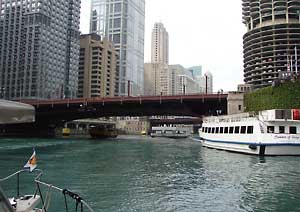 End of the Line 2 navigating through downtown Chicago. The burgee on the bow is the white "Loopers in Route" flag. They now fly the America's Great Loop Cruisers Assoc. gold burgee since receiving their BaccaLOOPerate degree.
Macro alias: RTEEmbeddedImage

<p>In September, we reboarded <em>End of the Line 2</em> and set out for Chicago, our first stop on the trip back to Florida. Navigating through downtown Chicago was a remarkable experience. Skyscrapers rose like canyon walls on either side as we slipped by the Wrigley Building, the University of Chicago and the Sun-Times building. From downtown we went through the "south side" of Chicago; the Chicago Sanitary Canal was our busiest stretch of anywhere.</p>

<p>We then followed the Illinois River to the Mississippi. After 260 miles on the Mississippi, which we feel Mark Twain really "over romanticized," we turned left onto the Ohio River until just above Paducah, KY, and entered the Cumberland. The Cumberland flows from Lake Barclay, which is connected to Kentucky Lake. It is hard to believe that once there were homes and thriving towns here before the area was flooded by the Tennessee Valley Authority to build Kentucky Dam. We could see railroad bridges to nowhere and ghost towns still above the waterline.</p>
<p> After crossing into Kentucky Lake and then the Tennessee River, we continued south through the Tenn-Tom Waterway and then finally into the Tombigbee River. When we cleared Coffeeville Lock, 116 miles north of Mobile, we had transited exactly 100 locks.</p>
<p>The further south we cruised we saw more forests and wood related businesses at work. It surprised us to find out that Mobile, AL, was the leading exporter of forest products in the country. Leaving Mobile and entering the Intracoastal again, we enjoyed some of the loveliest scenery of the trip. The natural beauty of Northern Florida rivals anything we saw along the way. After crossing a calm Gulf of Mexico from Apalachicola to Dunedin, FL, we arrived home October 10. We traveled 4,303 miles in the seven weeks actually spent on the water making the trip. Our Grady-White had more than enough room for all the supplies and clothes we needed...and we are still speaking!</p>
<p>We love <em>End of the Line 2</em> just as much now as when we first saw her. She's a great boat and never let us down!</p>